In conducting the National Review, the Commission collected quantitative data through a National Prevalence Survey. This survey provided the first representative data on the experiences of pregnancy/return to work discrimination by working mothers. It has also provided data on the experiences of discrimination of fathers and partners who have taken time off to care for their child.

In terms of qualitative data, the Commission undertook a wide-ranging consultation and submission process. The National Review team conducted more than 50 face-to-face group consultations with stakeholders (including individuals affected by discrimination, unions and community organisations, employers and business and industry peaks) in the capital cities of every state and territory across Australia, as well as in some regional areas.

Through the consultations, the National Review team met with over 430 individuals, employers, and representatives of community organisations, unions, employer associations and business or industry peaks. In addition, over 440 written submissions were received from individuals affected by discrimination, as well as from community organisations, unions, employers, employer associations and business or industry peaks. This enabled the voices of both employees and employers to be heard directly, providing an insight into their experiences and the challenges they faced in the workplace. Roundtables were also held with academics, government departments and agencies and other stakeholders.

Both the quantitative and qualitative data confirmed that pregnant employees and working parents experience many different types of discrimination in the workplace. These range from negative attitudes and comments from colleagues and managers, through to loss of opportunities for further training and career advancement, reduction in pay and conditions, as well as redundancy and job loss.

This discrimination has significant short-term and long-term negative impacts on individuals and their families, including effects on their mental and physical health and long-term career advancement and earning capacity. Some groups of individuals, such as sole parents and young mothers, may face particular vulnerabilities and more acute consequences.

As well as these individual effects, the National Review found that discrimination has a tangible impact on women’s workforce participation. The National Prevalence Survey revealed that experiences of discrimination in the workplace during pregnancy influence whether women return to work following the birth of their child – 32% of all mothers who were discriminated against at some point went to look for another job or resigned. Further, almost one in five (18%) mothers indicated that they were made redundant or that their jobs were restructured, that they were dismissed or that their contract was not renewed during their pregnancy, when they requested or took parental leave, or when they returned to work. Such discrimination, particularly where it results in job loss or the withdrawal from the workforce, can have significant long-term effects.

Overall, the Survey’s findings demonstrate that discrimination towards pregnant employees and working parents remains a widespread and systemic issue which inhibits the full and equal participation of working parents, and in particular, women, in the labour force.

Discrimination places an economic impost on employers, industries and individual organisations and on the Australian economy, particularly to the extent that it contributes to women’s under-participation or withdrawal from the workforce.

It has been estimated that increasing women’s workforce participation in Australia by 6% could increase the national GDP by $25 billion.2 Increased participation of women and greater gender diversity at senior levels in an organisation has tangible benefits in terms of better efficiency, performance and innovation, as well as increased access to the female talent pool and improvements to organisational reputation.

The National Review also identified the structural barriers that women and men face. These include the limited availability, affordability and accessibility of early childhood education and care services, as well as the underlying stereotypes and assumptions about childbearing, parenting and the roles of women and men in the home and in the workplace.

Workplace cultures that are informed by the existence of pervasive harmful stereotypes about ‘the pregnant employee’, ‘the employee with family or caring responsibilities’, ‘the flexible worker’ and stereotypes about the ‘ideal worker’ contribute to this discrimination.

Many employers also shared the difficulty they encountered in understanding their legal obligations – from the multiplicity of legislation with which they must comply, through to challenges in implementing their obligations. This was particularly evident in relation to accommodating the specific needs of pregnant employees, managing return to work for parents after parental leave (such as managing flexible work), and shifting ingrained stereotypes and attitudes that can impede the successful implementation of policy for, and management of, working parents.

Although the existing legal framework is reasonably comprehensive, better protection against discrimination could be provided by strengthening it in a number of areas.

However, the strategy with the highest impact in reducing discrimination in this area is to address the gap that currently exists between the law and its proper implementation within organisations. Several complementary strategies and actions are necessary to address this gap. These include ensuring employers and employees gain an increased understanding of the legislative framework, improving the clarity and dissemination of information, conducting effective training, changing workplace cultures to remove harmful stereotypes, practices and behaviours, and monitoring the implementation of policies. With strong leadership within organisations, reforms that shape more supportive and successful workplaces can occur.

Many workplaces in Australia recognise both the importance of supporting working parents and the cost of discrimination to their organisations. The National Review met with and heard from workplaces that were implementing leading practices and strategies. They agreed that removing discrimination is a business imperative.

The principal finding of the National Review is that pregnancy/return to work discrimination is pervasive and has a cost for everyone – the person affected, their family, their workplace, on employers and on the national economy. Its existence is limiting the participation of women in paid work and the productivity of organisations and the national economy. Addressing workplace discrimination in this area is therefore not only a human rights imperative, but also a business priority. Managing pregnancy, parental leave and return to work in the workplace is not a discretionary option. It is absolutely critical to the growth of a strong economy and a cohesive society.

It is up to all of us – government, employers, unions, peak bodies, community organisations and men and women in workplaces around Australia – to play a role in addressing such discrimination and preventing its continuation.

Women and men in STEM often at odds over workplace equity

Westpac commits to achieving gender parity in management by 2017

Gender and the Australian Parliament

Women in leadership: lessons from Australian companies leading the way 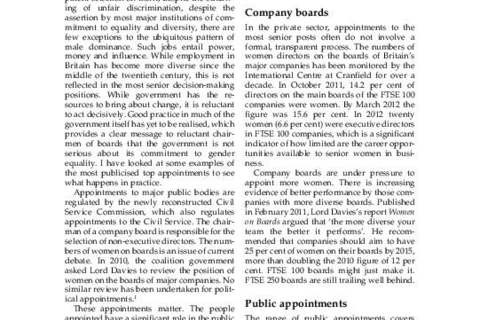 Balancing gender at the top