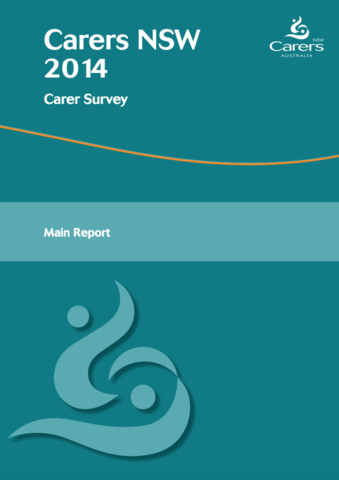 The biennial Carers NSW Carer Survey collects information about carers in NSW to inform the organisation・s direction, support and systemic advocacy for all carers across NSW. The 2014 survey collected more extensive and detailed data than any previous Carer Survey and has established a framework to guide future surveys. This report provides an overview of the main findings from the survey data, with future publications to investigate specific issues in greater depth.

The survey was completed by 1,684 carers - 84% of whom were female, and over half were aged between 45 and 64 years. A significant majority were the main provider of care for those they supported. Approximately one in three had experienced a long-‐term illness or disability themselves within the previous year. While the demographic profile of survey respondents indicated a wide range of caring relationships and experiences, comparisons with population-‐based statistics highlight that this sample is not representative of the broader NSW carer population. This limits the generalisability of survey findings, however, it also allows for more detailed data analysis to be conducted within the more highly represented sub-‐groups of carers, and also suggests areas for improved data collection in future surveys.

Carers generally framed their reasons for caring in a positive way, with more than twice as many wanting to take on their caring roles than felt they had no choice. Nevertheless, a significant proportion indicated that no one else assisted them or that they would not be able to find help if they needed a break. Significantly, over one quarter of respondents reported providing more than 70 hours of care per week. This finding is particularly important, since associations were found between the hours of care provided per week, the length of caring roles, and the prevalence of carers' long‐term illness or disability.

In line with a great deal of previous literature, the wellbeing of carers in this survey was low compared to the general Australian population. Despite this, carers consistently emphasised the positive value of caring as being greater than the negative impacts. This report highlights those carers who are at greater risk of experiencing low wellbeing, including those with more intensive caring demands and those with long-‐term illnesses or disabilities. At the same time, male carers and older carers tended to report higher levels of wellbeing.

Carers reported using local doctors and family/friends for support more than any other source, as well as being restricted from accessing services by the cost, not knowing what was available, and their caring responsibilities taking priority. A majority of carers were not currently accessing supportive services for themselves and interestingly, most did not want to. When carers were satisfied with the services received by the person(s) they cared for and felt more included by service providers, they were more likely to report better wellbeing outcomes.

Carers of people with a disability were invited to share their expectations of the impact of person centred approaches and individualised funding to the disability service sector. Awareness of these concepts had increased since the Carers NSW 2012 Carer Survey, with expectations being more positive than negative. Notably, carers who had practical experience of individualised funding packages were much more positive about their introduction than those yet to experience them.

Former carers were also invited to complete the survey, with 146 responses being received. Their previous caring roles had usually ended through the death of the person they cared for or the care recipient's admission into residential care facilities. Very few indicated that they had stopped caring because they could no longer cope, highlighting carers' resilience and dedication to their caring roles.

The data collected in this survey will inform a range of advocacy and research work. Importantly, the Carers NSW 2014 Carer Survey makes a significant contribution to the evidence base regarding carers in NSW, with the main findings indicating implications for the recognition and support of carers by service providers, governments, and the wider community.