For a number of years, individual companies and organisations like the Organisation for Economic Co-operation and Development (OECD) have compiled indices purporting to rank the best or most liveable of the world’s cities. In many instances one or more Australian cities have appeared at or near the top. In our media and across the community, the responses to this vary. For some it is a source of pride, for others proof that particular policy approaches or investments are working. For some individuals and communities, though, there is a sense that such claims do not mirror the realities of their day-to-day lives. Often such sentiment reflects concern about the speed of change, with changes in both the size and structure of cities bringing issues of housing, congestion and access to employment and services to the fore.

This report, the State of Australian Cities 2014-2015 - 2015, building on the Progress in Australian Regions – Yearbook 2014, provides evidence regarding progress in Australia’s cities – how they contribute to the nation and which cities, and parts of cities, are progressing. They also provide important information on how our cities are changing. As detailed in this report, the populations of Australia’s major cities are at record levels, as are the number of people employed, reinforcing the national trend. It is in our cities that the overwhelming majority of jobs are located and where the most new jobs are being created, driving further their growth in population. The economic output of our major cities has grown and their national importance remains extremely high, although mining activity in regional Australia has seen the overall percentage contribution by major cities to Gross Domestic Product (GDP) dip slightly.

Similarly, our major cities have made the largest contribution to increases in important social measures like labour force participation. Significantly, more people in our major cities hold a vocational or higher education qualification, reflecting an increase in human capital. Increased population and greater employment bring with them challenges, particularly the need to effectively manage competing demands for space.

Nowhere is this more apparent than on our transport networks, which are critical to the movement of record numbers of people and goods. In 2015 there is more demand for transport in Australia than ever before. Kilometres of total travel (all modes combined) within Australia are at the highest levels ever recorded, there are more trips through our airports (with our major cities home to our international and busiest domestic airports), there is more container traffic through our major city ports than ever before, and there are record numbers of registered motor vehicles in every state and territory. Perhaps unsurprisingly, with increasing growth in total kilometres travelled, average commuting times in major cities have trended upwards. With further growth forecast, in population and in passenger and freight demand, the findings of this report identify the challenges that policy makers will need to respond to in order to see continued progress in major cities. Critically, this will mean the integration of long-term planning in order to anticipate and address growing demand and avoid unnecessary additions to transport tasks, making efficient use of existing transport infrastructure and identifying and planning for future needs.

There are clear differences in progress within cities on issues such as workforce participation and average duration of unemployment, but these suggest significant untapped potential. The decline in some parts of cities against indicators such as these and the trend towards spatial groupings of people with the least household wealth pose clear challenges for policy makers. The first section of this chapter provides an overview of the report’s main themes, and the key findings of each chapter. The second section discusses the report’s methodology, definitions and use of data. 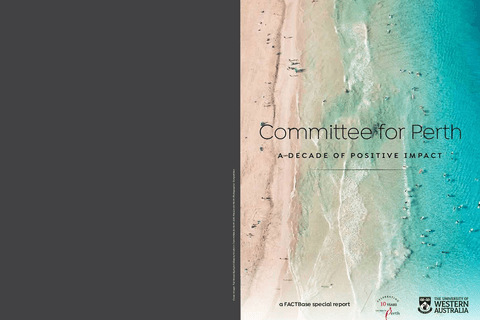 Committee for Perth: a decade of positive impact

Bhutan: Can the 1.5 °C agenda be integrated with growth in wealth and happiness?

Needle in a haystack: searching for the impact of tax cuts on consumer spending and economic growth