National anti-racism strategy and Racism. It stops with me: summary evaluation and future direction

In 2011, the Australian Government made a commitment to a comprehensive National Anti-Racism Strategy (the Strategy).

The Australian Human Rights Commission (the Commission) was provided with a budget of $1.7 million over four years to develop and implement the Strategy.

The Strategy was launched in August 2012, along with a nationwide public awareness campaign Racism. It Stops with Me (the campaign).

The aim of the Strategy is “to promote a clear understanding in the Australian community of what racism is, and how it can be prevented and reduced.”

Its objectives are to:

The National Anti-Racism Strategy is a partnership-based strategy with a focus on public awareness, education resources and youth engagement. The Commission worked to meet these objectives through two separate, but related, streams of activity:

Six strategic projects have been developed and delivered to date, targeting priority areas identified in the Strategy. Given the resourcing and breadth of the Strategy, we have largely focused on creating resources that could be widely used within target sectors and which built on and reinforced existing good practice.

Considerable preparatory research and consultation was undertaken before these projects were developed to ensure they met the target audience needs.

As the resources and products produced by a number of these projects are still in the early implementation stage it is not yet possible to fully assess outcomes. However, they will be reviewed or evaluated where feasible.

Racism. It Stops with Me campaign

The Racism. It Stops with Me campaign has three objectives - to:

To achieve these objectives, the Commission adopted a partnership approach. At the time of writing, 364 organisations have joined the campaign as supporters. They have each been asked to:

The campaign outputs have been reviewed, including the website, resources, and social media activity. A detailed analysis of feedback from surveys, interviews and case studies has also helped to determine the campaign’s impact and the extent to which it has met the campaign and Strategy objectives.

The activities and outputs of the Strategy are documented in detail through the body of the report.

How well was the Strategy implemented, and what difference did it make?

As the Strategy projects are still in the early implementation stage it is too early to answer this question in relation to these initiatives – they will be considered as each project is evaluated. Much of the data at this stage focusses on the reach of impact of the Racism. It Stops with Me campaign.

The most recent annual survey of campaign supporters was sent to over 280 organisations in 2014 and had a response rate of 21 per cent. It found that 84 per cent of respondents felt the campaign had had a positive impact. No respondents indicated a negative impact.

Other key findings were:

Since joining the campaign, respondents had done, or were planning to do, the following:

57 per cent of respondents had anti-racism policies, procedures or projects in place prior to joining the campaign. 70 per cent of these thought that the campaign had been beneficial in reinforcing or leveraging support for these.

A thematic analysis was used to assess the impact of activities to date. The thematic findings link to the evaluation questions and relate back to the Strategy’s objectives.

Data suggests the Strategy, particularly the campaign, has been successful in starting conversations about racism. In the words of online survey respondents:

The campaign almost legitimises people to feel more comfortable in talking about racism.

The campaign helps to bring the issue of racism to a conversational level.

I talk about the campaign wherever I go.

In some cases, joining the campaign mandated conversations about racism and an organisation’s response to it.

Referees were obliged to discuss zero tolerance to racism and talk about what players and spectators could do if an incident occurred. (Football Federation Victoria)

The rationale for the campaign slogan Racism. It Stops with Me was to encourage individuals and organisations to take responsibility for ensuring that racism does not occur, or for doing something about it when it does. Many organisations joined the campaign to send a message – to their staff, or their community – that they would not condone racism.

Being a part of this campaign sends a strong message to our community that we support its cultural diversity and we, as a community, will bear no tolerance for racism. Our cultural diversity is our strength and the Shire will continue to employ methods to ensure that racism does not have a place in our community. (Online survey respondent)

Some case study participants identified resources provided by the Commission as particularly beneficial, while many supporters produced their own resources. For example, developing and displaying campaign posters on transport networks was the most popular activity undertaken by the campaign’s transport supporters, enabling them to effectively and efficiently communicate a strong anti-racism message to commuters.

There was broad recognition of the leadership displayed by the Commission in developing a national strategy:

This is an excellent initiative. We commend the Commission for its leadership. (Online survey respondent)

Also evident was the ways in which the Strategy, particularly the campaign, assisted supporter organisations to demonstrate leadership against racism. As Metro Tasmania’s chief executive officer said, “We want to be out there in the public face and show that if there is any racism out there we’ve got to stop it and we don’t want it.”

Similarly, the Newington Gunners Football Club wanted to show their community that “anti-racism and diversity are a part of our culture – this is nothing special – it’s the way we do business around here.”

One of the most consistent findings was the extent to which the Strategy provided leverage to initiate anti-racism activities, or to build on and strengthen existing activities. This was clearly highlighted in both the quantitative and qualitative analysis of the Racism. It Stops with Me campaign.

Being part of a national campaign and the national Strategy demonstrates that we are not lone wolves and gives added strength to what we are saying. (Supporter key informant 12)

Sometimes a specific incident prompted an organisation to join the campaign and take action. For example, the NSW Minister for Citizenship and Communities and the Member for Coogee announced the rollout of Racism. It Stops with Me posters on buses and bus stops in eastern Sydney following a racial attack against schoolchildren on a Sydney bus.

This evaluation report demonstrates that the Commission has done ‘a lot with a little’ by creating a network of partners and supporters taking action against racism and by encouraging communities to use the national campaign to support their individual and organisational efforts.

With greater resources, more could have been achieved, such as broader reach and greater systemic change. However, our approach has been to share responsibility and resources and to use our status and leadership to encourage and support local initiatives.

There is good evidence that some short to medium term outcomes of the Strategy have been achieved in a relatively short timeframe. That is, awareness of racism and how best to respond to it is growing, and behaviour change is occurring, within individuals, organisations and communities reached by the Strategy.

This evaluation has been critical to the National Anti-Racism Partnership in planning the future direction of the Strategy.

In leading the next stage of the Strategy and campaign, the Commission will build on its efforts in the areas of:

We will also focus on communities and public places.

Work will fall under two distinct but complementary themes:

We will prioritise the following activities:

The National Anti-Racism Partnership will continue to support the implementation of the Strategy and campaign, and will be expanded to enable more effective engagement with priority sectors.

10 ways employers can include Indigenous Australians

Black and proud: racism in sport

Building resilience in the face of racism: options for anti-racism strategies 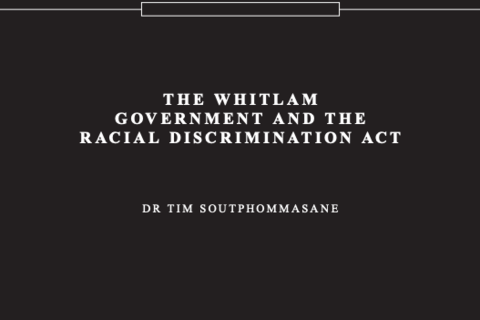 The Whitlam Government and the Racial Discrimination Act

Having my voice heard

Freedom from discrimination: report on the 40th anniversary of the Racial Discrimination Act