The consumption of alcohol at high risk levels is a national issue, however, the focus of this inquiry is the harmful use of alcohol in Aboriginal and Torres Strait Islander communities.

Many reports and studies have recommended stemming the flow of alcohol to address the problems, but usually these works do not analyse why a person drinks at levels which cause them and their loved ones harm. The social and economic determinants of harmful alcohol use such as unemployment, poor housing, racism, trauma, poor education and peer pressure mean that Aboriginal and Torres Strait Islander communities are overly impacted by the harm caused by alcohol consumed at high levels.

A recent Amnesty reports note that it costs $440,000 per year to keep one young person in detention in Australia. This report recommends that justice reinvestment strategies should redirect these resources to overcoming the deprivation and despair in so many Aboriginal and Torres Strait Islander communities.

This report addresses strategies and treatments found to help in addressing the harmful use of alcohol. Community led solutions are always the key to uptake and success. Unfortunately slow government processes, for example approving community produced alcohol management plans and the short length of project funding often frustrates community initiatives.

The magnitude of the problem caused by high risk consumption of alcohol is often hidden by the lack of collection of useful data for example at the time of hospital admissions, when children are put into out of home care because of their neglect, when people are incarcerated because of alcohol related crime and when children are born with Fetal Alcohol Syndrome (FAS) or Fetal Alcohol Spectrum Disorder (FASD) at some of the highest rates in the world.

The committee found examples of the world’s best practice at places like Groote Eylandt and Fitzroy Crossing. These communities, led by women’s initiatives, have demonstrated courage and determination to tackle alcohol harm to provide a safe environment for their families and community. The committee commends them and hopes that their strategies can be used as examples of a way forward for other communities.

FASD or FAS is creating generations of children whose brain damage will reduce their potential to live lives full of promise and well-being. The rates of FAS and FASD in some Aboriginal and Torres Strait Islander communities in Australia are amongst the highest in the world and yet FAS and FASD are not recognised as a disability for many social security allowances and payments. The lack of knowledge about, and recognition of FASD and FAS extends beyond the failure to have it officially recognised for social security and NDIS purposes, it also needs to be understood in schools, the criminal justice system and in the health sector.

The committee found that impacts of alcohol on children in communities represents a national tragedy as it is manifested in children growing up with fathers, and increasingly mothers, who are incarcerated, as the children’s abuse and neglect leads to the need for out of home care at record levels, missed schooling and too often ultimately become young alcohol addicts or abusers of other illicit substances.

This committee urges adoption of these recommendations as a matter of urgency given the extent of harm and intergenerational afflictions when alcohol is consumed at such high risk levels.

Fetal alcohol spectrum disorders: a review of interventions for prevention and management in Indigenous communities

The prevalence of hazardous drinking in older New Zealanders 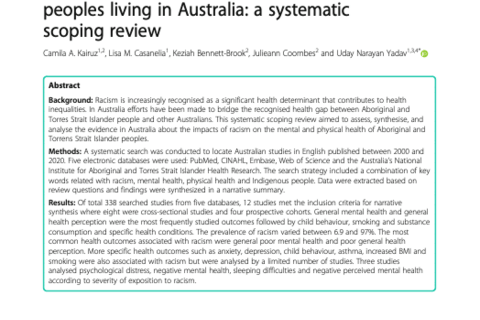 Impact of racism and discrimination on physical and mental health among Aboriginal and Torres Strait islander peoples living in Australia: a systematic scoping review