The serious impact and consequences of physical assault

Provides an analysis from the AIC’s Database of Victimisation Experiences (DoVE) of cases of common assault that are not related to domestic disputes or involving sexual assault.

In 2012, there were 116,105 recorded victims of physical assault in New South Wales, South Australia, Western Australia, the Northern Territory and the Australian Capital Territory combined (ABS 2013); equating to a victimisation rate of 969 per 100,000 population. This reflects a trend that has been consistent for the last 18 years of police recorded crime statistics, where physical assault has had the highest rate of victimisation of any of the four major types of violent crime (ie homicide, physical assault, sexual assault and robbery; AIC 2014).

Estimates provided by the ABS’ Crime Victimisation Survey provide further insight into the nature of physical assault in Australia. In 2012–13, there was an estimated 498,000 people over the age of 15 years who were the victim of a physical assault. An estimated 60 percent (n=294,100) of these were male, while individuals aged less than 34 years were more likely to have been assaulted compared with any other age group (ABS 2014). Females were more likely to be victimised in the home by a family member, whereas males were more commonly assaulted by a stranger in place of recreation (ie pubs or nightclubs) or on the street (ABS 2014).

Yet despite these statistics, the narrow focus of academia and policy on particular types of violence has resulted in the impact of some forms of physical assault being somewhat overlooked. For example, the negative consequences of experiencing domestic violence or sexual assault have been extensively studied. Briefly, the experience of domestic or intimate partner violence has been associated with the development of a wide range of negative outcomes including mental health issues, feelings of shame or guilt and difficulties relating to men (see Ansara & Hindin 2011; Coker et al. 2002; Roberts et al 1998). Similar negative consequences have been found for sexual abuse, as well as other effects such as difficulties in interpersonal relationships, particularly around sexual functioning (see Cashmore & Shackel 2013; Colman & Widom 2004; Watson & Halford 2010).

This type of information is particularly relevant, as it has been used to inform the types of services available to support victims of these types of violence. Yet victims of non-domestic, non-sexual physical assault have not received the same level of attention. In order to address this knowledge gap, the consequences of physical assault victimisation in isolation from other types of violent crime are explored in this paper. The purpose is to discover the impact of physical assault on both the victim and their family. This includes the effect of this type of violence on the victim’s physical and psychological health, as well as their social, educational and occupational functioning.

Supporting victims through the legal process: the role of sexual assault service providers

Effectiveness of victims of crime programs 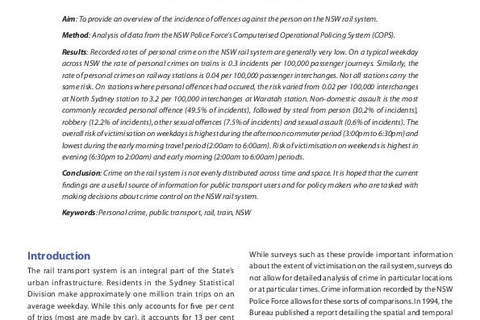 Crime on the NSW rail system 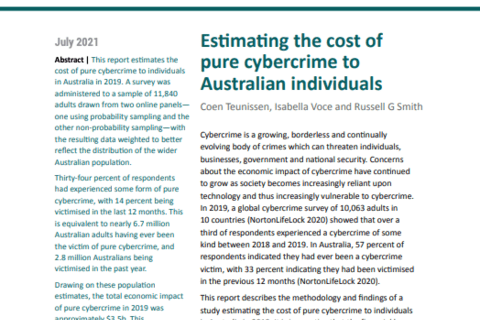 Estimating the cost of pure cybercrime to Australian individuals 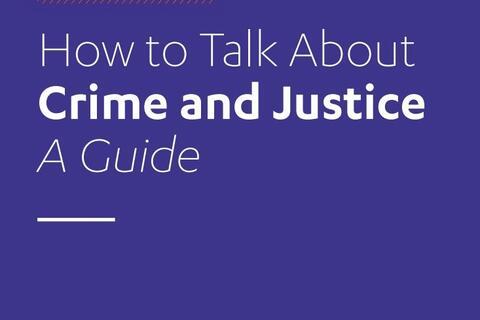 How to talk about crime and justice: a guide

Targeting scams: report of the ACCC on scams activity 2018