The unbearable lightness of being Gold Coast

The City of Gold Coast on the eastern coast of Australia is famous for its sun and surf and viewed mostly as a resort town. Its glittering image as a vacation destination with long stretches of beaches, gold lame bikini clad meter maids, tanned surfers, and skyline of skyscrapers dominates the discussions about the city. Wise (2006, 185) sums up the general perception of the Gold Coast accurately when she says:

“The city continues to be characterized in the national media as a ‘cultural desert’. Its neighbour, the state capital Brisbane, is represented as having ‘matured’ into a ‘metropolitan centre’ with a ‘vital arts life’ and definable ‘cultural precincts’, like Sydney and Melbourne. But in the Australian cultural imaginary the Gold Coast’s total identification with leisure, popular cultural excess and dispersion is taken to signify a sort of perpetual adolescence. There is no expectation that it will ‘grow up’ into ‘a real city’ where ‘culture’ occurs”.

If we look at the other side of the coin we discover one of the fastest growing cities in Australia, already far larger than some of the state capitals with half a million people, the largest non-metro city, the largest urban area outside the major state capital cities and home to the second most populous Local Government Area (LGA) in Australia. We argue that a real city with two universities, an international airport, national sports teams, regional hospitals and many other amenities is emerging from behind this facade; a city that aspires to host the 2018 Commonwealth Games. As Grifffin (1998, 286) notes “Gold Coast isn’t an easily definable place with a singular identity.” The city has been variously described as “a sunny place for shady people” (Jones 1986, 1), “sin city” (by Brisbane Sunday Mail, Griffin 1998), “the most postmodern of all Australian cities” (by Allom Lovell Architects Griffin 1998), “an urban setting that has already achieved many of the conditions towards which post-industrial urban centres are moving” (Holmes 2001, 179), “the most heterogeneous region in Australia” (McRobbie 1991, vi), a city experiencing “adolescence” (Burton 2009, 1) and a resort centre that is currently evolving into a city (Edwards et al., 2007). Stimson and Minnery (1998,196) suggest that the Gold Coast presents at least four different images to the world: “a city of leisure; a city of enterprise; a city of tourism; and a city in its own right within the South East Queensland `sun-belt’ growth metropolis”. With the aim of contributing to the literature on Australia’s settlement system by focusing on large scale urbanisation outside of the capital cities this paper provides an in-depth look at Australia’s sixth largest city, often taken too lightly. The purpose of the paper is two-fold: to question the accuracy of some widely held beliefs about the Gold Coast that treat it solely as a resort town and attempt to determine whether the nature of urbanisation on the Gold Coast is different. In order to illustrate in what ways the Gold Coast is similar to and different than other major cities in Australia, the paper describes its historical development, the nature of its built environment, social and cultural activities, population growth and demographic structure, and economic indicators. In doing this at times it contrasts Gold Coast with capital cities, the City of Sunshine Coast, the state of Queensland and Australia. 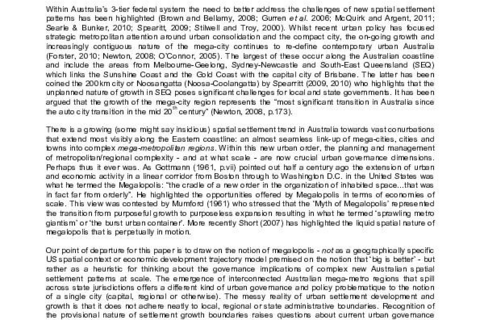 The challenge to (re)plan the Melbourne docklands and Port Adelaide inner harbour: a research agenda for sustainable renewal of urban waterfronts

Super-size my governance: a review of super-city reforms to spatial planning governance in Auckland compared with Brisbane/South East Queensland.

City without a plan: how the Gold Coast was shaped

Modelling as alchemy? Reflections from a PSS developer on the politics of land use models

Beyond economicism: challenging the concept of the Australian global city