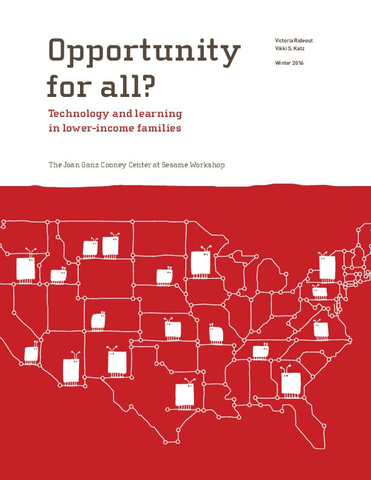 1. Most low- and moderate-income families have some form of Internet connection, but many are under-connected, with mobile-only access and inconsistent connectivity. Nine in ten (94%) families have some kind of Internet access, whether through a computer and Internet connection at home, or through a smart mobile device with a data plan. Even among families below the poverty level, nine in ten (91%) are connected in some way. However, many lower-income families are under-connected. For example, one quarter (23%) of families below the median income level and one third (33%) of those below the poverty level rely on mobile-only Internet access. And many experience interruptions to their Internet service or constrained access to digital devices. Among families who have home Internet access, half (52%) say their access is too slow, one quarter (26%) say too many people share the same computer, and one fifth (20%) say their Internet has been cut off in the last year due to lack of payment. Among families with mobile-only access, three in ten (29%) say they have hit the data limits on their plan in the past year, one-quarter (24%) say they have had their phone service cut off in the past year due to lack of payment, and one fifth (21%) say too many people share the same phone for them to be able to get the time on it that they need.

3. The main reason some families do not have home computers or Internet access is because they cannot afford it, but discounted Internet programs are reaching very few. Four in 10 parents without a home computer (40%) or home Internet access (42%) say the main reason they do not have these items is because they are too expensive. This is three times as many as those who said they decided they did not need Internet access (13%) and nearly twice as many as the proportion who said they do not need a computer (22%). Yet only 6% of those with incomes below 185% of poverty (a common eligibility level for discounted service) say they have ever signed up for low- cost Internet access through programs specifically for lower-income families. key findings 2 The federal poverty level for a family of four in 2015 was $24,250. https://aspe.hhs.gov/2015-poverty-guidelines Home versus mobile-only Internet access: In this report, “home access” is defined as having a laptop or desktop computer and a way to connect those devices to the Internet while at home. “Mobile-only access” is defined as being able to connect to the Internet through a smart device such as a tablet or smartphone, without having a computer at home. “No access” is defined as not being able to connect to the Internet through a device owned by the respondent or in the respondent’s household. 6

7. Children and parents frequently learn with, and about, technology together, especially in families with the lowest incomes and where parents have less education. Among families in which the parent and child both use the Internet, 77% of parents say they have helped their children with using digital technology, and more than half (53%) say their children have helped them. Among parents who did not graduate from high school, 62% say their child has helped them with technology, compared with 45% of parents who graduated from college. Among families with more than one 6- to 13-year-old and a computer in the home, 81% of children often or sometimes help each other learn about computers or mobile devices (including 44% who “often” do so). More than half (53%) of children from the lowest income group (less than $25,000 a year) “often” help each other learn about computers and technology, compared to 33% of those in the higher-income group ($45,000–65,000 a year).