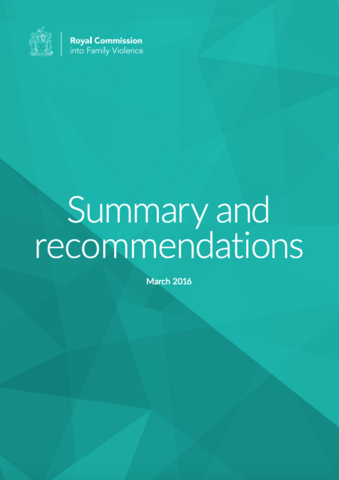 A number of high profile family violence incidents, including the murder of Luke Batty at the hands of his father, became the catalyst for a broader conversation within the Victorian community surrounding family and domestic violence. Child protection issues, the response of police and the justice system, the role of the health system and the funding of community-based family violence-related services were just some of the areas. Commissioner, The Hon. Marcia Neave AO, Deputy Commissioner, Patricia Faulkner AO and Deputy Commissioner, Tony Nicholson, were tasked with the review.

The Commission's multi-volume report canvasses the many views heard by the Commission during its consultation processes and covers a broad range of topics including risk assessment, information sharing, service system pathways, police, courts, offences and sentencing, housing, financial security, recovery, the experience of children and young people and people from diverse communities, system governance and oversight, industry planning, primary prevention, and the role the health system, faith communities and workplaces can play in addressing family violence.

The Commission's 227 recommendations are directed at improving the foundations of the current system, seizing opportunities to transform the way that we respond to family violence, and building the structures that will guide and oversee a long-term reform program that deals with all aspects of family violence.