1. Mothers do best in our cities. The top 10 best places to be a mother across the country are almost exclusively urban areas. Mothers in urban cities have better outcomes across all indicators. Access to maternal child health and other services, education opportunities and higher earning potential sees Australia’s cities consistently ranked highly across all states. However, there is still disparity within our cities. In Australia’s largest city, Sydney, infants born in the southwest are twice as likely to die before their first birthday as babies born in the wealthier inner-city North Shore. The few instances where cities shared the top 10 rankings with non-urban areas involved towns rich in natural resources. For example, in Queensland, the top 10 places to be a mother are a mixture of cities and towns near resources deposits.

2. Mothers do it tough in regional and remote areas. Women living in regional and remote areas of Australia have poorer health outcomes than their counterparts in the city. Research shows that mortality and illness levels increase with distance from major cities. These communities are characterised by higher hospitalisation rates and higher prevalence of health risk factors compared with metropolitan areas. They are further disadvantaged by reduced access to primary health care providers and health services (in part a function of health and medical workforce shortages), resulting in lower utilisation rates than in urban areas and consequent poorer health status for rural residents. Regional and remote areas ranked consistently in the toughest 10 places to be a mother across all states and territories. While there was often poor performance across our indicators, a sense of community may be one of the benefits of living outside cities. The Australian Longitudinal Study on Women’s Health found that scores for neighbourhood connectedness, feeling safe and life satisfaction were highest in remote areas and decreased with increasing proximity to major cities.

4. Mothers with fewer economic resources are doing it tough. Low income puts at risk the ability of mothers to keep their immediate environment healthy and secure, feed and clothe their children, look after their health needs and keep their children in school. Lower incomes were most common in regional and remote areas, meaning both geography and means compound the challenges of being a mother in these regions. During 2011–13, equivalised household income for Aboriginal and Torres Strait Islander households was just over half that of non-Aboriginal household income. This gap has not changed significantly since 2002.

Mothers and their babies: women’s experiences 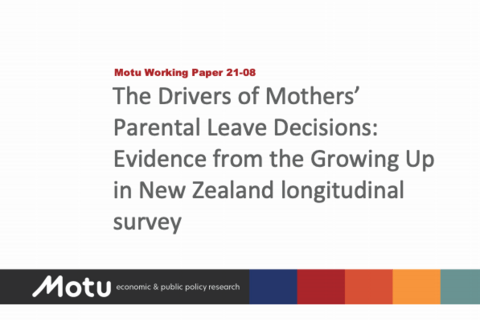 The drivers of mothers’ parental leave decisions: evidence from the Growing Up in New Zealand longitudinal survey

Relationships matter: the social and economic benefits of community playgroups

The first thousand days: a case for investment