Desmond Ball’s labours through four decades to elucidate the character of United States defence and intelligence facilities in Australia, to document the evidence, test the balance of benefits and dangers to both national security and human security, and then tell the story to his fellow Australians is unparalleled in Australian intellectual and political life, and I suspect on an international scale. The dedication, often neglected, to the most famous and influential part of this work, A Suitable Piece of Real Estate: American Installations in Australia, was the call 'for a sovereign Australia'. We might best sum up the character of Ball’s work of a lifetime – or more precisely, this one, brightly coloured, thread of a multi-stranded body of work – by recalling the enduring watchwords of an earlier Australian nationalist, Joseph Furphy: 'temper democratic, bias Australian'. Both elements are keys to understanding the animating force behind Ball’s work on the American installations in Australia – the concern for a fully and properly informed public as a prerequisite to democratic debate about the American bases, and the concern that Australians identify their country’s specific interests concerning the bases, citing Malcolm Fraser’s prescient but often ignored 1976 warning that the interests of the United States and the 'interests of Australia are not necessarily identical.'

And yet, this is not enough, on either count. One might more properly say of Ball on the bases that the work is characterized by “Temper offensively democratic, bias human”. Ball’s anger is clear for those Australian officials and politicians who would hide the true nature of these military and intelligence bases behind unwarranted secrecy, unjustified discounting of risk, and willingness to traduce the fundamental civil rights of citizens in a democracy. At root, Ball was not only sure that truths hidden or obfuscated by government would always be revealed in the end, but he was confident that a properly informed Australian public would be able to make judicious assessments on the merits of a case that a reasonable government committed to both genuine national security and a viable democratic polity could live with.

Moreover, while retrieving national sovereignty has always been central to Ball’s critique of particular American facilities (or particular aspects of some or all of them), from the beginning of his career Ball has often gone beyond questions of national interest to the identify the ways in which the outcome of misconstrued or inadequate conceptions of national interest have implications for the wider human interest – or indeed, a planetary interest – albeit in a distinctively Australian accent.

The SIGINT satellites of Pine Gap: conception, development and in orbit

The militarisation of Pine Gap: organisations and personnel

Getting it right: integrating the intelligence, surveillance and reconnaissance enterprise

The antennas of Pine Gap

The higher management of Pine Gap

The corporatisation of Pine Gap 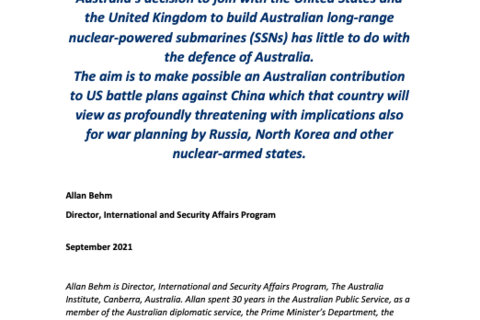