Uprooted by climate change: responding to the growing risk of displacement

Climate change is already forcing millions of people from their land and homes, and putting many more at risk of displacement in the future. Supercharged storms, more intense and prolonged droughts, rising seas and other impacts of climate change all exacerbate people’s existing vulnerabilities and increase the likelihood of being forced to move.

While climate change affects us all, the risks of displacement are significantly higher in lower-income countries and among people living in poverty. Oxfam’s analysis reveals that between 2008 and 2016, people in low- and lower-middle-income countries were around five times more likely than people in high-income countries to be displaced by sudden-onset extreme weather disasters. Women, children, Indigenous peoples and other vulnerable groups are also disproportionately affected.

The loss of homes, livelihoods and ancestral lands through displacement epitomizes the human cost and the grave injustice of climate change. Those least responsible for climate change are bearing the brunt of its impacts, and have fewest resources to cope with these new realities. The disproportionate incidence and impact of climate change related displacement both stems from and further drives inequality.

Displacement is disruptive and traumatic. However, much can and must be done to minimize the risk of displacement linked to climate change, and to guarantee rights and protection for people who are forced to move.

A first priority must be far more rapid reductions in global climate pollution, in line with limiting warming to 1.5°C. At the same time, communities must be supported to build resilience to the impacts of climate change that can no longer be avoided. Developed countries in particular must rapidly accelerate the de-carbonization of their economies. They must also increase the scale and accessibility of support to enable developing countries to transition to a 100 percent renewable energy future and adapt to the impacts of climate change. At the 2017 UN Climate Change Conference (COP23), governments must recommit to the goals of the Paris Agreement and substantially strengthen international action and cooperation towards ending climate pollution and building resilient communities.

While recognizing that all possible measures must be taken to avoid displacement, it is also necessary to support strategies to ensure that people who are forced to move in the future can do so safely, with dignity, and on their own terms. The negotiation by September 2018 of two new Global Compacts – one on safe, orderly and regular migration, and one on refugees – offers a critical opportunity to help ensure safety, dignity and lasting solutions for those who are displaced, or at risk of displacement, in the context of climate change.

In addition to actions and commitments at the global level, regional and national responses will play an increasingly important part in minimizing displacement in the context of climate change and ensuring that viable options are available to those forced to move.

Samoa: Exploring the Linkages Between Climate Change and Population Movements 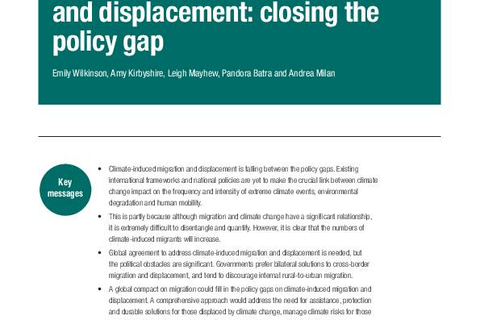 Human mobility: In the context of climate change UNFCCC-Paris COP-21

Cultural and National Identity in the Face of Climate Change: A Case Study of I-Kiribati Migrants in New Zealand

How many migrants come to Australia each year?