Activity limitations—particularly in the core activities of self-care, communication, movement between locations and moving/walking around—are a common way of measuring disability. Most (90%) younger people had an activity limitation in self-care, meaning that they had difficulty with daily tasks such as eating and getting dressed and needed another person’s supervision or help. More than 23% of younger people had an activity limitation in all 4 core activities; however, this varied depending on their first-listed or ‘main’ health condition. The top 3 main health conditions were dementia, cancer and cerebrovascular disease. Dementia was relatively less common among the youngest age group; instead, this group had other progressive neurological conditions.

Almost 1 in 4 younger people who entered permanent care in 2009–10 to 2013–14 had not used any other aged care beforehand. Of those who had used care, the most common program was the entry-level Home and Community Care (HACC).

The Victorian younger people in residential care intiative: evaluation of quality of life outcomes for participants 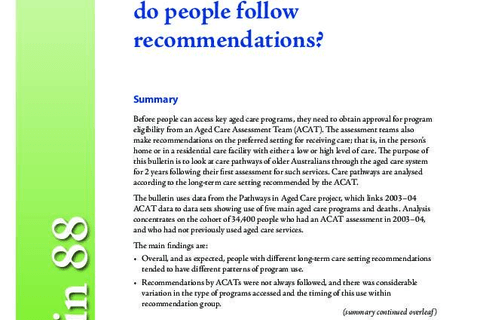