The Global Humanitarian Assistance report is produced by Development Initiatives, and uses the latest data to provide the most comprehensive report to independently assess international financing at work in humanitarian situations.

While continuing to be the biggest donors, the US reduced its spending by US$423 million (-6 per cent), Germany by US$367 million (-11 per cent), and the UK by US$271 million (-11 per cent) last year. This is despite record amounts being requested by the United Nations to deal with unprecedented need. The overall amount of humanitarian assistance globally did, however, slightly increase due to a leap in spending from the UAE and Saudi Arabia by US$1.7 billion and US$806 million respectively – far higher than their usual contributions. Resources beyond international humanitarian assistance are also vital for dealing with crisis, and there are worrying statistics on this highlighted in the report. International inflows and domestic resources are considerably lower per person in crisis-affected countries than other developing countries (40 per cent and 72 per cent lower respectively).

There are, however, some positive trends in the way financing is delivered.

Cash and voucher programmes – which can give people choice and control over the funds intended to help them – grew by 10 per cent from 2017 to a record US$4.7 billion in 2018. Multi-year funding, critical for responders to manage the ongoing impact of crisis is also growing. Key donors were found to have increased this longer-term funding considerably over the last few years so that it now comprises over a third of their humanitarian contributions.

Other key facts and data from the report:

Rethinking capacity and complementarity for a more local humanitarian action

How DFID can better manage complexity in development programming

Charities and terrorism: Lessons from the Syrian crisis

Fit for the future: priorities for Australia’s humanitarian action 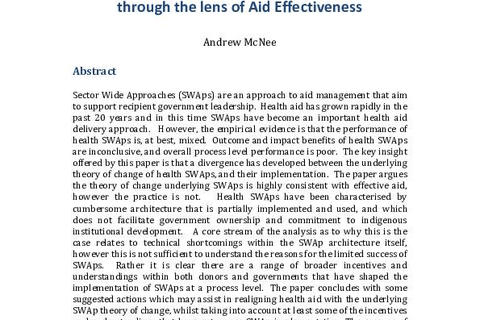