Abstract
Art is an important component of Aboriginal culture. Creative arts-based health promotion projects have been used in Aboriginal and Torres Strait Islander populations across Australia to address a variety of health issues, including smoking. A number of artistic mediums have been utilised in Indigenous arts-based health promotion work, including painting, dance, and music. When using an arts-based approach, projects and resources must be culturally appropriate in order to appeal to Aboriginal populations. It is recognised that while arts-based projects can be valuable for engaging the Indigenous community, evaluation is complex and determining the effectiveness of projects in changing behaviour is difficult. Two similar Aboriginal-targeted arts-based smoking themed projects were identified from the literature, both of which followed a similar structure to this project.

Objective: For Aboriginal communities to be engaged on health issues such as smoking through culturally-appropriate interventions such as art.

Methods: An art competition was held with the Central Coast Aboriginal community to create artworks around the theme of smoking. To facilitate the production of artworks, Central Coast Local Health District Health Promotion Service engaged an Aboriginal artist to lead art workshops with local Aboriginal organisations. Art resources were provided at the workshops. Aboriginal organisations were encouraged to have their staff, clients and community members participate in the workshops. The community voted for their favourite artworks online. Prizes were awarded to the artworks that received the most votes.

Conclusion: Ten local Aboriginal organisations were invited to host a workshop, and 5 participated. Seven art workshops were delivered, with 66 people attending the workshops and 38 artworks being produced. Eighteen artworks were entered into the art competition, which attracted 156 votes from the community The art workshops and competition were effective ways to engage the Aboriginal community on the topic of smoking cessation. Additional work is planned to build upon the momentum established by this project, such as using the artworks developed from the workshops in Aboriginal-specific resources and campaigns to contribute towards decreased smoking rates in the Aboriginal community.

Drugs in Australia 2010: tobacco, alcohol and other drugs

The Aboriginal and Torres Strait Islander smoking epidemic: what stage are we at, and what does it mean 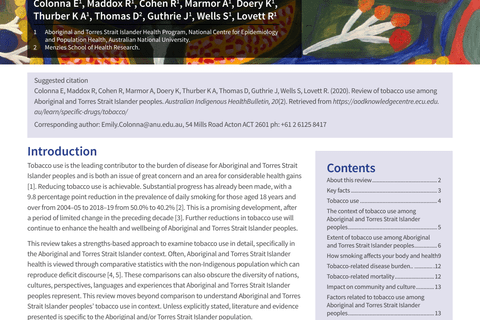 Review of tobacco use among Aboriginal and Torres Strait Islander peoples