Skip to main content
We want your feedback! Complete the 2022 Newsletter Subscriber Survey and you can go into the draw to win: 2x $200 vouchers, 3x My APO+ memberships, and a ticket to EIS 2023.
Thesis

Skin infections are a common and widespread ailment among children. While these infections have generally been considered benign, the number requiring overnight hospitalisation for treatment, termed 'serious skin infections', has risen markedly in recent years with the incidence in NZ children thought to be significantly higher than that in children of comparatively developed countries. This study aimed to define serious skin infections and describe their epidemiology in the NZ setting.

Increased awareness of serious skin infections has resulted in a number of national and regional reports being released over the past decade. However, the accuracy of these existing skin infection data has been limited by the lack of a consistent and valid case definition. By assessing the screening performance of various case definitions when applied in the setting of 4 years of paediatric admissions to a provincial NZ hospital, a new definition for serious skin infection was produced which improved sensitivity from 61% to 99% with negligible loss in specificity.This new case definition was then applied to national hospitalisation data to identify all 0-14 year old children admitted overnight to a NZ hospital with a serious skin infection between January 1990 and December 2007. During this 18-year period the incidence of infection almost doubled from 294.1/100 000 in 1990 to 562.3/100 000 in 2007. Seasonality showed consistent peaks in late Summer and early Autumn. The highest rates were observed in boys, children under 5 years old, Māori (NZ Indigenous peoples) and Pacific children, those living in deprived neighbourhoods, in urban areas and in Northern districts of the country. Trends over time showed the distribution of disease changed with evidence of worsening ethnic and socioeconomic disparities in infection rates. The highest regional incidence was found in the Tairawhiti (Gisborne) Region, where during the same 18-year period admissions rose even more rapidly from 414.5/100 000 in 1990 to 993.3/100 000 in 2007. A closer comparison of hospitalisation data between Tairawhiti and NZ found ethnic disparities in serious skin infection rates were greater in the Tairawhiti Region than nationally. In addition, the overall disease incidence was significantly higher than that expected even after controlling for differences in the population distribution of age, ethnicity and deprivation. This finding suggests the involvement of other unknown aetiological factors.To better understand factors contributing to the need for inpatient treatment, a chart review was conducted of all 163 children admitted to Gisborne Hospital with a serious skin infection between January 2006 and December 2007. Compared to studies in other NZ settings, types, sites and causal organisms of infections were similar. However, there were longer delays to seek medical attention with only 77% of children seeing a GP after a median of 2 days of symptoms, resulting in 60% requiring immediate hospitalisation. In hospital, 70% of cases received intravenous antibiotics and 31% required surgical treatment for their infection. One third of children had suffered a previous skin infection with 12% requiring hospitalisation.Finally, to investigate the hypothesis that trends in serious skin infections reflect corresponding patterns of infection in the community, and to estimate the often hidden burden of skin infection in primary care, a sample of Tairawhiti general practitioners recorded all cases of skin infection in children diagnosed over a 10-week period in 2008. There were 110 incident cases of infection during the study period; through age and ethnicity standardisation this was found to be equivalent to an annual incidence rate of 106.7 (95%CI 85.2-127.2) cases per 1000 children. For every one hospitalisation there were 14 cases seen in primary care. Comparing analogous primary care and hospital demographic data showed that three quarters of skin infections in both primary care and hospital settings occurred in Māori children. There was no gender predominance in either setting, however hospitalised cases of serious skin infection were more likely to occur in the preschool age group with children aged 5-9 years predominating at the primary care level.Serious skin infections are a significant and increasing source of morbidity in NZ children. They now contribute to over 4,500 hospitalisations annually and, based on extrapolations from Tairawhiti data, an estimated 60,000 general practice presentations each year. In addition, they contribute to health disparities with evidence of worsening ethnicity and deprivation-related inequalities over time. Efforts need to be both directed towards effective and sustainable prevention of these infections and towards ongoing research to better understand the aetiology of disease and opportunities for reducing their incidence.

Children with special healthcare needs, and atopic dermatitis: an update

A place to grow 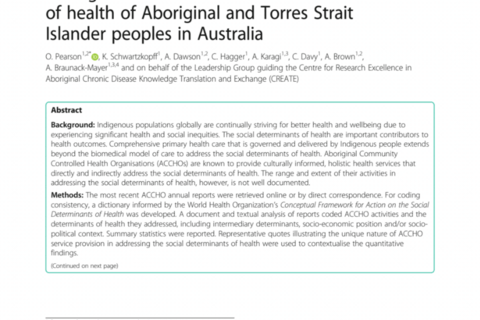