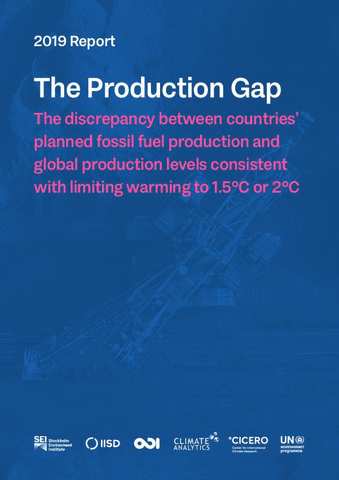 This report is the first assessment of countries' plans and outlooks for fossil fuel production, and what is needed to align this production with climate objectives. It follows in the footsteps of the United Nations Environment Programme’s (UNEP) Emissions Gap Report and other reports that review countries’ greenhouse gas emissions and compare them with the emission levels needed to meet global climate goals.

The report represents a collaboration of several research and academic institutions and experts. UNEP staff provided guidance and insights from their experience leading other gap reports. Assessment of the production gap was based on the most recent and publicly accessible government plans and projections for fossil fuel production at the time of analysis. For other elements of the report, such as the magnitude of producer subsidies or the status of policies to limit production, the report draws from a mix of publicly available government, intergovernmental, and research sources as cited and listed in the references.