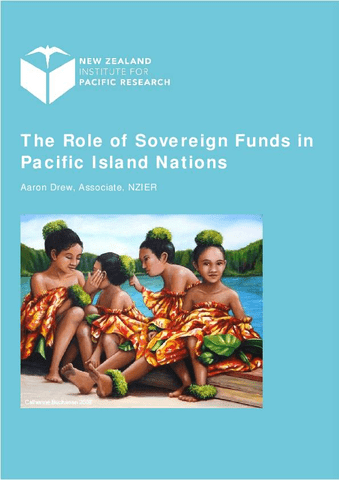 The role of sovereign funds in Pacific Island nations

One of the five key first-year projects for the NZIPR is examining the roles of Sovereign Funds (SFs) in the Pacific Islands. This reflects the fact that SFs are often the largest single asset owner and investor in the Pacific Islands, and the income stream from these funds can also be a large part of fiscal revenues. They can be an important part of Pacific Island wealth, and may help promote economic development and buffer Pacific Island economies from shocks such as natural disasters. Particularly in the smaller Island nations, they are also seen as mechanisms to enable greater levels of selfdetermination, reducing the reliance on foreign and remittances.

This report is the first in a series of papers on the role of SFs in the Pacific. It is mainly concerned with documenting the different types of Pacific Island SFs and setting the broad context and economic case for these funds, given differing PI nation resources and constraints – not least the fact that many of the Islands have very small population bases scattered across vast oceanic distances. Our coverage of the Pacific Islands includes the very small Island nations in Polynesia and Micronesia, as well as the larger and more populous Melanesian Islands such as Papua New Guinea and the Solomon Islands.

We believe there are insights and lessons from the Pacific Islands experience that will be of interest to other small economies considering the role of SFs (for example in the Caribbean), and the wider SF research community. Despite this, research attention on Pacific Island SFs has been limited, and published cross-country studies tend to be dated and focussed upon Sovereign Trust Funds.

Our research provides an updated and comprehensive review of the role of the Pacific Island SFs, including Sovereign Provident (Pension) Funds which are often very significant investors in the Pacific Islands.

PI Funds are amongst the longest established SFs in the World (e.g. Kiribati’s RERF was established in 1956), and Pacific Island SFs tend to have much more dispersed and innovative funding sources than Funds established by larger nations. While most PI Funds tend to be very small in terms of AUM compared to funds in more populous nations, they can be very large relative to gross national incomes.

We find that many Pacific Island funds serve multiple economic purposes (e.g. to provide short-term macro stabilisation and a source of inter-generational wealth) in practice if not in legislation. For example, we document that Pension Reserve Funds play an important role in domestic development and investment, even though it is not their primary purpose. In theory, this is not ideal given there is potential for these purposes to contradict each other, and in relation, the ‘optimal’ asset allocation to meet their economic purpose. But in practice factors such as the very small scale, limited resources, lack of domestic financial markets, and huge distances to markets in many Island nations mean that the establishment of multiple funds may not be feasible.