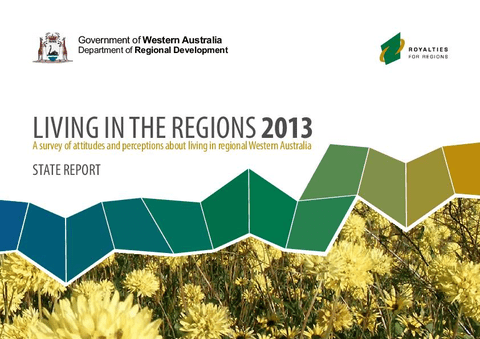 From the initial 1997 survey of Western Australian regional residents, the Living in the Regions 1999 reports provided important information about why people decided to live in, or move away from, regional Western Australia. It was the first time there was more than just anecdotal accounts concerning people living in, and considering a life in, the regions. Among other uses, findings from the initial survey were used to support planning and decision-making and to inform grant applications and budgetsubmissions. Not only did the 1997 survey provide valuable data, the exercise assisted in raising the profile of individual regions and their collective importance, particularly in contributing to the Western Australian economy and sense of identity. It is timely that the newly established Department of Regional Development undertakes this valuable exercise that builds and expands on the 1997 results.

The purpose of the Living in the Regions 2013 survey was to ascertain what attracts people to the regions, to understand the barriers to living in the regions, to measure the quality of life in regional Western Australia, and to use that information to inform and direct regional development initiatives into the future. Many changes have taken place since the first survey. This report captures the current landscape, where there is wider knowledge of the economic and social contributions made by the regions to the state and the nation as a whole. Reflecting these changes, the survey has been extended, items have been clarified and the language updated. The resultant survey is similar to but also different in important ways to that used in 1997.

These differences limit the extent to which comparisons to 1997 can be made. The Living in the Regions 2013 survey is in effect a new baseline from which to view regional Western Australia. With the wealth of information provided by the 2013 survey, a series of reports are planned. In addition to this whole of State report, region-based reports will be produced for all nine regions, as well as specific topic-based reports. The Department of Regional Development is committed to making information as available to the regional community aspossible.

Pilbara cities: from projects to places

Country policing - it's not rocket science

The costs of conflict with local communities in the extractive industry