Analysis of publicly known examples of cyber-enabled foreign interference in elections reveals key challenges. First, while perceptions of interference are widespread, the actors are few—Russia and China—and the effort is highly targeted. Russia is targeting the US and Europe (with a few forays into South America), while China targets its region (having, for the moment, reached as far as Australia). Second, the methods used can be hard to pick up and democracies seem poorly equipped to detect intrusions, being traditionally focused on external intelligence collection. Adversaries are able to enter public debates, infiltrate legitimate activist networks and even enter the mainstream media as trusted commentators. Significant activity may be being missed. Finally, while opinion polling shows concerning levels of dissatisfaction with democracy and weakening trust in public institutions, it’s very difficult to assess the impact of election interference on those phenomena. It’s likely to have some impact but be outweighed by larger societal factors.

First, the response from democracies should be calibrated to the likely risk and adversary. The US and European states are clear targets of Russia; Indo-Pacific nations are targets of the Chinese Communist Party (CCP). Second, more effort is needed to detect foreign interference, including offline and non-state efforts. Because democracies have a natural aversion to government surveillance, a better answer than simply stepped-up government monitoring may be supporting non-profit, non-government initiatives and independent media. Third, effort is needed to develop better ways to measure the impact of foreign interference to allow for a more informed decision on resourcing efforts to counter it. Notwithstanding the lack of current empirical data on impact, opinion polling points to a perception that foreign interference will occur and, in places such as the US, a view by many that the 2016 presidential election was swayed by it (a credible view, given the narrowness of the outcome). Research is needed to measure the effectiveness of different education and awareness efforts to address these concerns. Fourth, public funding may be needed to better secure political parties and politicians from cyber intrusions. Finally, democracies need to impose costs on the two primary state actors: they should consider joint or regional action to make future or continued interference sufficiently costly to those states that they will no longer pursue it. Legislation may also be needed to make it more difficult for foreign adversaries to operate (being mindful of the differing objectives of the two main actors); this may be a second best for countries that find it too difficult to call out adversaries.

Assessing Russian activities and intentions in recent US elections 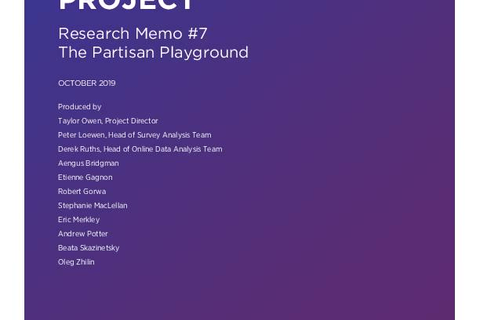 A matter of (mis)trust: why this election is posing problems for the media