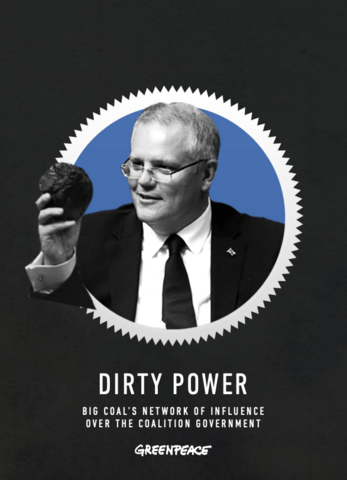 The coal industry is powerful and has infiltrated Australian government at the highest levels, all the way to the office of Prime Minister, Scott Morrison. Its power and influence were key factors in the downfall of two prime ministers, Kevin Rudd and Malcolm Turnbull, and in the abolition of a range of policies driving action on climate change.

Former coal industry staff now enjoy direct access to senior government ministers. A wide, well-funded network of lobbyists, supported by coal’s political and media allies, has been key to protecting the interests of coal companies operating in Australia. Individuals at the executive and staff level of these organisations regularly trade places, reinforcing the connections within a system that keeps coal at the centre of Australian politics, stifling energy sector reform and action on climate change.

This report exposes that hidden network of influence.

This report is based on interviews with dozens of political staffers, executives of external lobby firms, and resources sector analysts; previously hidden details about the identity and background of federal ministers’ parliamentary staff; and publicly available information about listed companies and their operatives.

While this report does not suggest any illegal or improper conduct on the part of any of the individuals or organisations named, the picture that emerges is of a government in thrall to coal: a situation that is dangerous for Australian democracy and terminal for our climate.

Prime Minister Scott Morrison’s senior staff is dominated by former executives and employees of the coal industry, its lobbyists, and pro-coal mastheads at News Corp. They include:

Former staff of the coal industry and its peak representative body, the Minerals Council of Australia, are employed across the federal Coalition government. Prominent examples include: