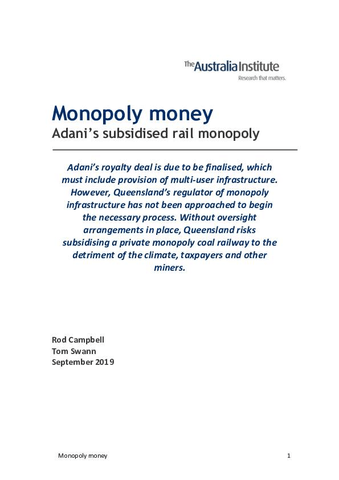 In May 2019 Queensland Premier Annastacia Palaszczuk declared she was “fed up” with the Adani assessment process and asked the state’s Coordinator General to publish a timeline for finalisation. The final item listed on the Coordinator General’s timeline is a “royalties agreement”, with a target date of 30 September 2019.

Under the Government’s royalty deferment framework, miners can defer royalty payments if their project includes the provision of common-user infrastructure. Little is known about the other terms of these agreements, but the interest rates charged by the government are likely to be far lower than commercial loans, resulting in significant subsidy to mines. Estimates of the subsidy represented by deferring Adani’s royalties range from $253 million to over $700 million.

Adani’s common-user infrastructure would be its Carmichael Rail Network, which will have additional capacity beyond Adani’s initial requirements. Adani emphasises that this rail will help “open up the Galilee Basin” to other miners.

In Queensland, access to infrastructure by third parties is regulated by the Queensland Competition Authority (QCA). The QCA website currently lists no information about access undertakings by Adani. In correspondence with The Australia Institute, the QCA has confirmed that Adani’s railway would not be covered by existing agreements with the wider Aurizon coal network and that there has been no application to begin assessing Adani’s project and get regulations in place.

Adani’s railway should be regulated in the same way as other Queensland railways. Adani’s project appears to meet all conditions for regulation by the QCA, but implementing such processes take time. Under its Act, the QCA must use its “best endeavors” to make its recommendation in under six months, but this can be extended in a range of circumstances. 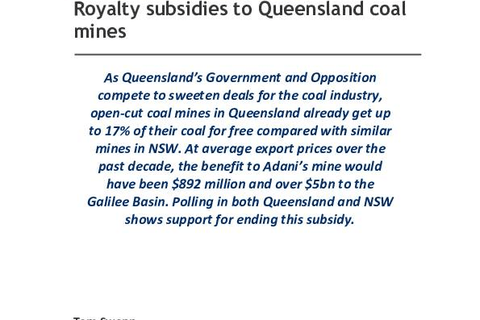 Adani impact by Queensland electorate: how Galilee Basin development affects the economics and politics of the existing Queensland coal industry

Big miners are the ultimate ‘leaners’