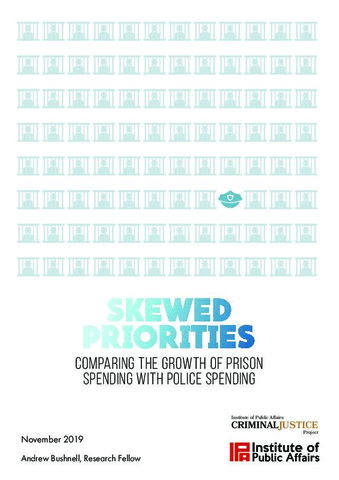 Over the past decade, Australia has seen an unsustainable rise in the rate and cost of incarceration. Nationally, the incarceration rate is at an all-time high of 217 per 100,000 adults, and prisons now cost taxpayers $4.6 billion every year (including capital costs).

This increase in spending on prisons creates a trade-off with other government priorities, like policing. Six years ago Australian governments spent more than $4 dollars on police for every $1 spent on prisons; today, that figure is $3.40. This pattern is seen in every Australian jurisdiction apart from the Northern Territory. This matters because, like incarceration, policing aims to deter would-be offenders. Indeed, many studies indicate that it performs this task more effectively than prison, because offenders are deterred more strongly by the prospect of being caught than the severity of the punishments that they may face.

International figures show that by the measure of police spending to prison spending, Australian jurisdictions rank in between American states, which tend to spend more on prisons, and the countries of the European Union, which tend to spend less. Australia is moving towards a more American-style distribution, even as the US moves in the opposite direction.

Moreover, high rates of incarceration eventually create trade-offs for other areas of government service delivery. In jurisdictions like Western Australia and the Northern Territory, there are noticeably lower ratios between spending on schools and public hospitals and spending on prisons. Given that education and health are both associated with reduced offending, this trade-off may again be reducing community safety.

A statistical snapshot of crime and justice in New South Wales