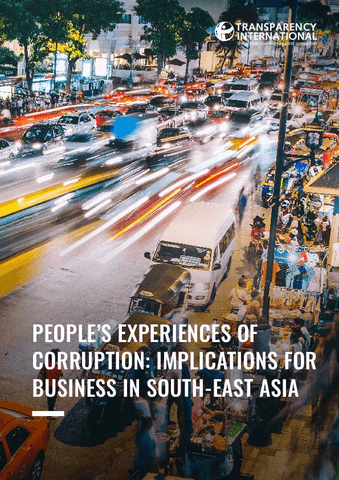 People's experiences of corruption: implications for business in South-East Asia

Corruption continues to be a pressing issue around the world, contributing to growing inequality and an erosion of democracy and public trust in governments. It is often regarded as a public sector issue, where government officials and civil servants abuse their entrusted power for personal gain. However, there is a strong link between corruption and the private sector that is important to acknowledge, especially within growing economies such as those in South-East Asia, where corruption could discourage legitimate foreign investment.

Corruption increases both the costs and difficulty of doing business in a particular country, where such costs paid through bribery are eventually passed down to consumers themselves. Some businesses in developing countries also find that facilitation payments made to public officials are frequently necessary in order to receive basic public services in a timely manner. Bribery and facilitation payments are problematic for businesses, as these practices not only increase prices, but also distort market competition.

In recognising that corruption continues to be one of the key challenges faced by companies doing business in South-East Asia, this report provides a perspective on the link between corruption and businesses in six countries: Cambodia, Indonesia, Malaysia, Myanmar, Thailand and Vietnam.

The case for a federal corruption watchdog: ICAC needed to fill the gaps in our integrity system

Operation Belcarra: a blueprint for integrity and addressing corruption risk in local government