Passing on wisdom: exploring the end-of-life wishes of Aboriginal people from the midwest of Western Australia

Objectives:
The present article has approached learning about end-of life wishes by bringing together insights gained through two different types of discussion about dying and end-of-life wishes with Aboriginal people.

Importance of study:
Despite premature loss of life experienced by Aboriginal people in Australia, little information is known regarding their attitudes to end-of-life discussions and their use of and experiences related to end-of-life care. The Australian literature related to palliative care and Aboriginal people is small, and to date been largely reported on the experiences of Aboriginal people in the Northern Territory, including issues such as dying on country, viewing and caring for the body post-death and ceremonial practices, and traditional post-death rituals such as smoking ceremonies and the wailing associated with sorry camps.

Study type: To understand Aboriginal people’s perspectives and experiences at the end of life, an exploratory study using facilitated group discussions in community settings in a region of Western Australia was undertaken. Local Aboriginal people were engaged to talk frankly about their wishes and concerns around end of life. The community consultations included two meetings at the local Aboriginal corporation, an evening meeting for invited community members, a meeting at the local Aboriginal community controlled health service and two further meetings of community members at local gathering places. These were supplemented by the analysis of previous in-depth video-recorded interviews that were undertaken with Aboriginal people with cancer reporting on their concerns and wishes.

Is there a role for law in medical practice when withholding and withdrawing life-sustaining medical treatment? Empirical findings on attitudes of doctors

Nurses' knowledge of law at the end of life and implications for practice: a qualitative study

A perfect storm: fear of litigation for end of life care 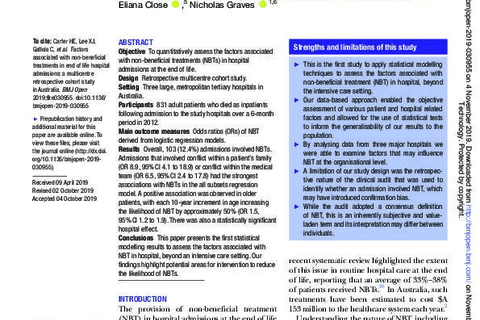