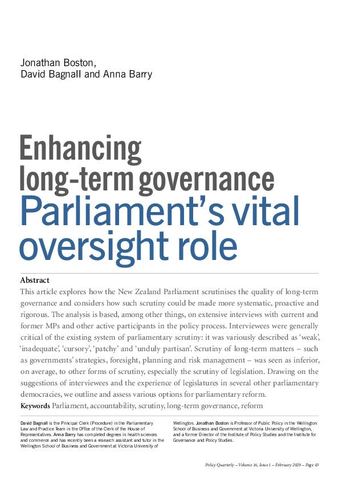 This article explores how the New Zealand Parliament scrutinises the quality of long-term governance and considers how such scrutiny could be made more systematic, proactive and rigorous. The analysis is based, among other things, on extensive interviews with current and former MPs and other active participants in the policy process. Interviewees were generally critical of the existing system of parliamentary scrutiny: it was variously described as ‘weak’, ‘inadequate’, ‘cursory’, ‘patchy’ and ‘unduly partisan’. Scrutiny of long-term matters – such as governments’ strategies, foresight, planning and risk management – was seen as inferior, on average, to other forms of scrutiny, especially the scrutiny of legislation. Drawing on the suggestions of interviewees and the experience of legislatures in several other parliamentary democracies, we outline and assess various options for parliamentary reform.

DIY M&E: a step-by-step guide to building a monitoring and evaluation framework

A report on misuse of council resources