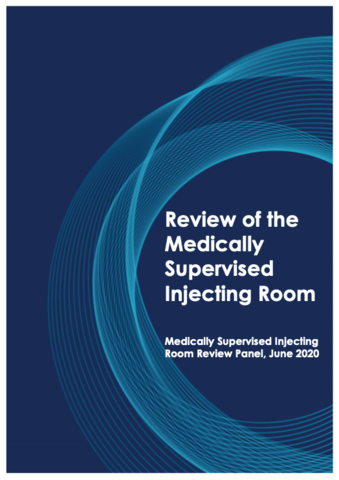 In October 2017 a trial of a medically supervised injecting room (MSIR) was announced for Melbourne. This followed growing concern about the number of heroin-related deaths, two parliamentary inquiries and coronial findings that an injecting room would reduce the risk of death from heroin overdose. The location selected was 23 Lennox Street, Richmond, the site of North Richmond Community Health (NRCH), which was licensed to operate the MSIR for two years starting 30 June 2018.

The review was conducted by an independent panel of experts comprising Professor Margaret Hamilton (chair), Mr John Ryan and Associate Professor Ruth Vine (since January 2020). Associate Professor Alex Cockram and Mr Ken Lay were on the Panel for the earlier part of the review. The review has considered relevant research, surveys of the local community and service users, direct observation and communication with a range of stakeholders.

The focus of this review is the first 18 months of the MSIR’s operation (June 2018 to December 2019), which includes one year in a transitional facility and six months in a larger facility.

After the first 18 months of the trial, the panel found that NRCH successfully implemented a medically supervised injecting room noting that implementation remains a work in progress.

Given that North Richmond has long been a major site of heroin use and related harms in Victoria, and that the trial has successfully reduced harms for service users, the panel call on the government to continue the trial of the Medically Supervised Injecting Room at North Richmond Community Health for a further three years.

Taking a new line on drugs

Special Commission of Inquiry into the Drug ‘Ice’: issues papers

The global state of harm reduction 2016

The global state of harm reduction 2014

The global state of harm reduction 2012

The global state of harm reduction 2010

Substance and alcohol use data in the Integrated Data Infrastructure (IDI)

The global state of harm reduction 2018