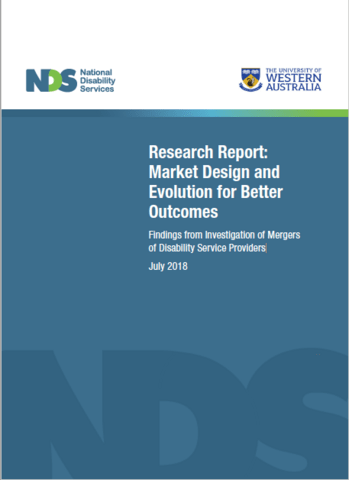 This report summarises research conducted into mergers of disability services providers during the period since 2014. It forms part of The Market Designs and Evolutions for Better Outcomes Research Program.

The introduction of the National Disability Insurance Scheme (NDIS) and the quasi-market model on which it is based fundamentally changes the economic context in which Australia’s predominantly Not-for-profit (NFP) disability services providers operate. Disability service provides have reacted in a number of ways. Importantly for this study, over 40% have discussed merger while 7% report that they have either merged in the last year or are likely to merge in the next year.

In nearly all cases, mergers are being considered for either defensive reasons—that is, due to financial stress—or as part of explicit growth strategies. In our research, the organisations seeking growth had undertaken, or were intending to undertake, multiple mergers. These organisations had developed merger skills in the senior team and board. The development of this skills base seems to suggest that the likelihood they would participate in additional mergers in future and the probability of success of those future mergers had also increased. In other words, leading mergers requires a distinct skill set and the experience of participating in actual mergers was increasing the appetite for them and the chance of success.

This research identified 85 relevant Australian and international resources, including academic and industry research reports and papers, guides and websites. In most cases, these resources also included research and advice in regard to collaborations. There is a great deal of similarity and duplication in these resources. They typically focus on the type of merger and structure of the final entity, the key success factors of merger or the essential steps that need to be undertaken, including due diligence investigations.

However, the authors' interviews found that despite the volume and availability of materials, many directors and executives did not access these prior to being involved in a merger. This was particularly the case for directors and CEOs undertaking merger for the first time, who often commented that the complexity, stress, time and cost involved in mergers was considerably more than they expected.

This report includes some of the resources the authors believe will be of most use to leaders of NFPs. However, they emphasise that reading any materials or attending training in how to undertake a successful merger would be of benefit, particularly to those new to mergers.

This report is funded with assistance from a funding grant offered under the National Disability Research and Development Agenda, jointly implemented by disability representatives from Commonwealth, State and Territory governments.