Data on all known drowning deaths in rivers across the last 10 financial years (1 July 2002 to 30 June 2012) has been sourced from the National Coronial Information System (NCIS), State and Territory Coronial Offices and the media. It has been collated and analysed by the Royal Life Saving Society – Australia.

Almost three quarters (74%) of people who drowned in rivers, did so within 100kms of their home postcode. This provides strength to the argument that public awareness and drowning prevention strategies should be targeted at the local community level to ensure greatest efficacy.

first aid are vital, as is education among those living in Remote and Very Remote areas about how to minimise the risk of drowning in rivers.

Analysis of the data showed that 17% of all river drowning deaths were known to be related to flooding. The State of Queensland experienced 56% of all known flood related drowning deaths in rivers. Over half (56%) of all drowning deaths that took place in flooded rivers were as a result of either being swept in or deliberately entering floodwaters in non-aquatic transport. Further work must be conducted within the community to highlight the dangers of flooded rivers.

Indigenous people drowned at a rate of 1.58 per 100,000 population in rivers, a rate that is 4.4 times that of the general population. Almost half (46%) of drowning deaths in Indigenous Australians occurred in the 25-44 years age range. Over half of all Indigenous people that drowned in rivers (54%) were known to have a positive reading for alcohol in their bloodstream when they drowned. Alcohol was also known to be a contributing factor in 64% of all cases where Indigenous people intentionally entered floodwaters. Culturally appropriate strategies to prevent drowning in Indigenous Australians should be developed that highlight the dangers of floodwaters and alcohol consumption whilst recreating in, on or near rivers.

Drowning deaths known to involve alcohol accounted for almost half (49%) of all drowning deaths in the 45-54 years age group. A key issue identified during analysis of the data was the extremely large amounts of alcohol being consumed prior to drowning deaths in rivers. Half of all drowning victims whose blood alcohol concentrations were deemed to be contributory (i.e. a Blood Alcohol Content equal to or greater than 0.05g/L) had a Blood Alcohol Content of 0.2 or higher. This level of alcohol in the bloodstream is four times that of the legal driving limit.

Twenty seven percent of all river drowning victims recorded some form of drug in their bloodstream when they drowned. In just over a third of these cases, the drugs were known to be illegal, the most common of which were cannabis and methamphetamine. Of the legal drugs detected, commonly occurring types were anti-depressants, anti-convulsants and cardiovascular agents such as anti-arrythmic drugs.

The analysis of river drowning data, clearly indicates a significant issue related to alcohol consumption, in rivers across Australia. Although better reporting is required, drowning prevention strategies for rivers must include information on the risks of interacting with rivers when under the influence of alcohol, alcohol and medications and/or alcohol and illicit drugs.

This report makes a number of recommendations aimed at expanding our knowledge of river recreational patterns and to reduce drowning deaths in Australian rivers. These include enhanced understanding of the risks of floodwaters, increased awareness and enforcement of legislative requirements regarding use of watercraft whilst under the influence of alcohol in rivers and improving CPR and first aid skills in Remote and Very Remote areas.

Further research is also required around the recreational patterns and risk profiles of river drowning black spots and improving our understanding of river user’s attitudes towards the risks and hazards present in rivers. 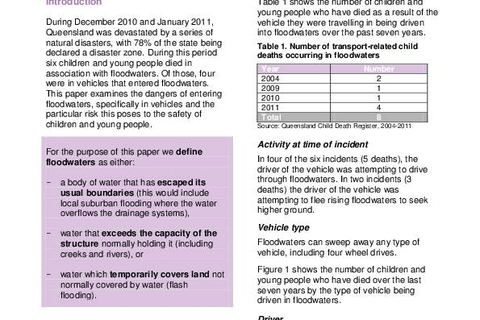