The Independent Review of Whole-of-Government Internal Regulation (the review) was commissioned by the Secretaries Board in March 2015 in response to a perceived burgeoning of regulation within the Commonwealth public sector.

I was soon aware that many relevant government policies were already being reviewed, while others with the potential to reduce regulation were in the process of being implemented.  They included the deregulation and smaller government agendas as well as Australian Public Service (APS) Transformation initiatives and reforms in the areas of digital transformation, shared services and contestability.  The review has benefitted from the work already done, as it has from the work undertaken by departments in identifying their own regulation.

These activities and the openness with which I was assisted across entities suggest a willingness, indeed eagerness, to be rid of the layers of process that currently exist.

There are barriers, however, created in part by an aversion to risk; inadequate consideration of alternatives to, or better ways to introduce, new regulation; and a failure to ask whether regulation, perhaps once needed, has simply become unnecessary clutter.

This report responds to the review’s Terms of Reference (TORs – Attachment B) which required that I assess the need for, and impact of, regulations.  Regulation was defined as referring to “requirements that are mandatory for all or most entities, or guidance, practice or procedure that is treated as such”.[1]

The review objectives were to:

The report sets out my observations and recommendations across the range of externally imposed and self imposed regulation, and makes observations on culture in the APS as it relates to regulation.

I have kept in mind current fiscal constraints, but some recommendations would require funding or reallocation of resources.  I have not focussed on identifying savings, though some recommendations, if fully implemented, might lead to savings in the short or long term.

The TORs state that “the over-arching principle for the review is that regulators prove that regulation is needed”.  The methodology was designed with this principle in mind and to allow me to meet the review’s requirements, which were to:

I gave initial priority to discussions with the Secretaries and deputies of four key regulators of the public sector (the Department of the Prime Minister and Cabinet (PM&C), the Department of Finance (Finance), the Attorney-General’s Department (AGD) and the APSC).  Deputies from these four entities comprised a working group that oversaw the review.  Officials from Finance and AGD provided secretariat support to the review.

The review has also been informed by:

Key regulatory areas were identified with the assistance of the Deputy Secretary Working Group, Public Management Reform Agenda reference groups and a stock-take of regulation.

The strength of stakeholder feedback, the impact of the regulation across government, access to evidence to assist analysis and the time available all influenced the level of analysis across key regulatory areas.  For instance, where reform initiatives were already underway, recommendations have tended to be more specific as evidence was available to support detailed suggestions for action.  Where activities had not been examined for some time, evidence was less readily available, so recommendations are more likely to be general or suggest further examination.

Where I have recommended action by entities, it will often be the case that there will also be a requirement for government, and potentially the Parliament, to endorse or give effect to the proposed change.  While recommendations have taken account of implementation issues, and this report includes some observations in relation to implementation, I have not attempted to anticipate implementation strategies or processes.

[1] Regulations that apply beyond the public sector, for example taxation and privacy legislation, are beyond the scope of this review. 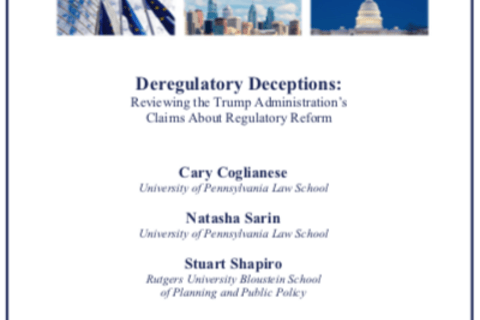 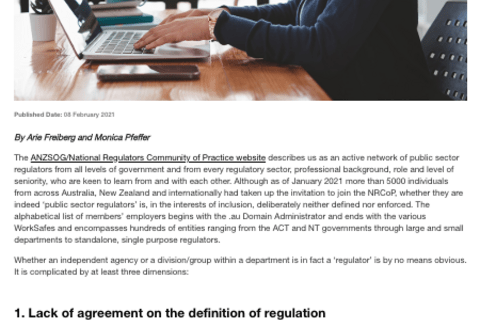 "What’s in a name?" Does knowing you’re a regulator make a difference?

One‑stop shops for citizens and business