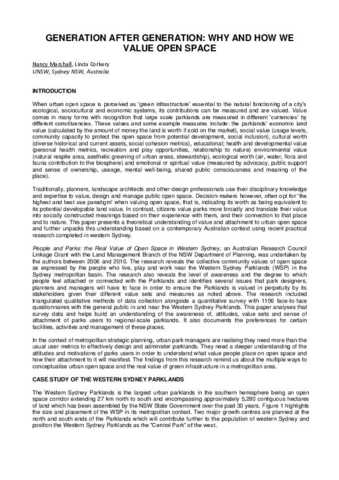 Generation after generation: why and how we value open space

Abstract: When urban open space is perceived as ‘green infrastructure’ essential to the natural functioning of a city’s ecological, sociocultural and economic systems, its contributions can be measured and are valued. Value comes in many forms with recognition that large scale parklands are measured in different ‘currencies’ by different constituencies. These values and some example measures include: the parklands’ economic land value (calculated by the amount of money the land is worth if sold on the market), social value (usage levels, community capacity to protect the open space from potential development, social inclusion), cultural worth (diverse historical and current assets, social cohesion metrics), educational; health and developmental value (personal health metrics, recreation and play opportunities, relationship to nature) environmental value (natural respite area, aesthetic greening of urban areas, stewardship), ecological worth (air, water, flora and fauna contribution to the biosphere) and emotional or spiritual value (measured by advocacy, public support and sense of ownership, useage, mental well-being, shared public consciousness and meaning of the place). Traditionally, planners, landscape architects and other design professionals use their disciplinary knowledge and expertise to value, design and manage public open space. Decision-makers however, often opt for ‘the highest and best use paradigm’ when valuing open space, that is, indicating its worth as being equivalent to its potential developable land value. In contrast, citizens value parks more broadly and translate their value into socially constructed meanings based on their experience with them, and their connection to that place and to nature. This paper presents a theoretical understanding of value and attachment to urban open space and further unpacks this understanding based on a contemporary Australian context using recent practical research completed in western Sydney. People and Parks: the Real Value of Open Space in Western Sydney, an Australian Research Council Linkage Grant with the Land Management Branch of the NSW Department of Planning, was undertaken by the authors between 2006 and 2010. The research reveals the collective community values of open space as expressed by the people who live, play and work near the Western Sydney Parklands (WSP) in the Sydney metropolitan basin. The research also reveals the level of awareness and the degree to which people feel attached or connected with the Parklands and identifies several issues that park designers, planners and managers will have to face in order to ensure the Parklands is valued in perpetuity by its stakeholders given their different value sets and measures as noted above. The research included triangulated qualitative methods of data collection alongside a quantitative survey with 1106 face-to-face questionnaires with the general public in and near the Western Sydney Parklands. This paper analyses that survey data and helps build an understanding of the awareness of, attitudes, value sets and sense of attachment of parks users to regional-scale parklands. It also documents the preferences for certain facilities, activities and management of these places. In the context of metropolitan strategic planning, urban park managers are realising they need more than the usual user metrics to effectively design and administer parklands. They need a deeper understanding of the attitudes and motivations of parks users in order to understand what value people place on open space and how their attachment to it will manifest. The findings from this research remind us about the multiple ways to conceptualise urban open space and the real value of green infrastructure in a metropolitan area.