Prudential Inquiry into the Commonwealth Bank of Australia: final report

APRA announced the Prudential Inquiry on 28 August 2017 to examine the frameworks and practices in relation to the governance, culture and accountability within the CBA group, following a number of incidents that damaged the reputation and public standing of the bank. A Panel to conduct the inquiry – comprising Dr John Laker AO, Chairman of the Banking and Finance Oath, company director Jillian Broadbent AO and Professor Graeme Samuel AC, Professorial Fellow in the Monash Business School – was appointed on 8 September 2017 and the Inquiry’s investigative work began the following month. A progress report was released on 1 February 2018.

The final report is comprehensive and contains a large number of findings and recommendations. Its overarching conclusion is that "CBA’s continued financial success dulled the senses of the institution", particularly in relation to the management of non-financial risks.

The report also found a number of prominent cultural themes such as a widespread sense of complacency, a reactive stance in dealing with risks, being insular and not learning from experiences and mistakes, and an overly collegial and collaborative working environment which lessened the opportunity for constructive criticism, timely decision-making and a focus on outcomes.

The report raises a number of matters of prudential concern. In response, CBA has acknowledged APRA’s concerns and has offered an Enforceable Undertaking (EU) under which CBA’s remedial action in response to the report will be monitored. APRA has also applied a $1 billion add-on to CBA’s minimum capital requirement.

Prudential Inquiry into the Commonwealth Bank of Australia: progress report 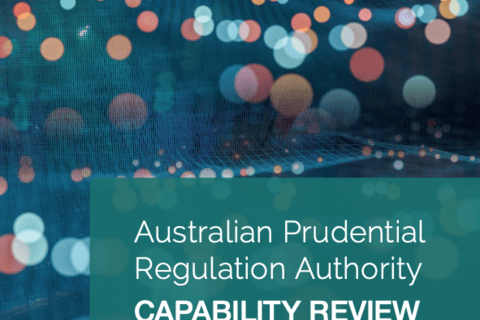 Royal Commission into Misconduct in the Banking, Superannuation and Financial Services Industry: draft terms of reference