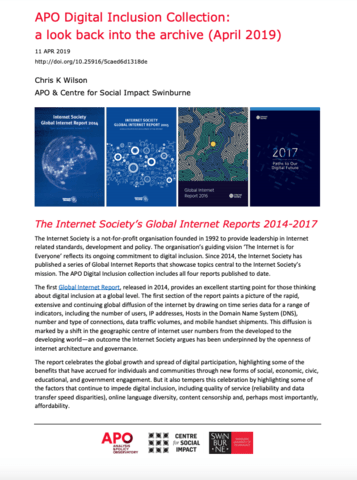 The first Global Internet Report, released in 2014, provides an excellent starting point for those thinking about digital inclusion at a global level. The first section of the report paints a picture of the rapid, extensive and continuing global diffusion of the internet by drawing on time series data for a range of indicators, including the number of users, IP addresses, Hosts in the Domain Name System (DNS), number and type of connections, data traffic volumes, and mobile handset shipments. This diffusion is marked by a shift in the geographic centre of internet user numbers from the developed to the developing world-an outcome the Internet Society argues has been underpinned by the openness of internet architecture and governance. The report celebrates the global growth and spread of digital participation, highlighting some of the benefits that have accrued for individuals and communities through new forms of social, economic, civic, educational, and government engagement. But it also tempers this celebration by highlighting some of the factors that continue to impede digital inclusion, including quality of service (reliability and data transfer speed disparities), online language diversity, content censorship and, perhaps most importantly, affordability.

The international disparity in internet access has, according to the report, "arisen in part due to disparities arising in the cost of devices, software, and infrastructure around the world, particularly relative to the economic status of countries and hence the 'affordability' of Internet services" (p.100). A typical Internet subscription as a proportion of average GDP per capita in Austria in 2013 was 0.1% but 294.8% in Kiribati (p.100).

In 2015 the Internet Society chose to focus the Global Internet Report on mobile internet in recognition that the rollout of mobile infrastructure had become fundamental to internet uptake, particularly in the developing world, given the increased speed and lower cost at which it can be rolled out compared to fixed networks. By 2015, mobile infrastructure provided hundreds of millions of people their only, or primary, means of accessing the Internet. The Internet Society argued it would continue to drive digital inclusion noting that "Mobile Internet is the way the next billion are going to get online" (p.12). While the 2015 Global Internet Report provides some updates to the 2014 general internet usage data, it primarily introduces new material on the evolution of mobile internet, devices and apps and trend and projection data relating to its diffusion, pricing and usage.

The contribution of mobile technologies to the global growth and spread of digital participation is lauded in the report. But, as in the 2014 report, the Internet Society raise some concerns around persistent barriers to digital inclusion. These include general issues such as affordability, as well as more mobile-specific issues such as lack of openness in app platforms, differentiated wireless infrastructures, and current and future spectrum shortages. Some mobile technology limitations not covered in the report include the useability of some websites in the mobile browser environment and, more broadly, the functional capacity of mobile devices.

The issues of privacy and security raised in the 2015 report in relation to location-based personal data collection and wireless security vulnerabilities are taken up as a focus of the 2016 Global Internet Report. The data breach focus of the 2016 report clearly matches the Internet Society's goal of promoting and restoring trust in the Internet, but it also relates to the society's digital inclusion goal of 'connecting the unconnected' since "without trust in the Internet, those not yet online may find another reason to stay offline" (p.12).

The 2016 report provides some updates to the general internet usage data contained in the 2014 and 2015 report and introduces a range of data pertaining to the nature and cause of data breaches and their impact on organisations and users. This includes quantitative global data on the number, location, source/cause, and information targeted in data breaches and a series of ten case studies on specific breach events. It also draws on user and non-user surveys conducted in the US, European Union and Brazil. While these suggest that the issue of privacy and security is a relatively minor factor in keeping people offline, it is an issue that has led many people already online to restrict their online activities. One issue the report fails to address is the uneven distribution of digital literacy skills that can help individuals protect themselves from data breaches. Being safe and secure online is now a feature of a number digital skills frameworks that aim to enhance digital inclusion (such as the recently revised UK Essential Digital Skills Framework and the EU DigComp 2.1 Digital Competence Framework for Citizens).

In its 2017 Global Internet Report, the Internet Society celebrated 25 years of advocacy for "a global, open, secure Internet that benefits all people throughout the world" (p.4). The report marked a return to a more general theme - an assessment of the forces that are likely to shape the Internet over the next five to seven years. The report draws on a research program undertaken in 2016 that included interviews with over 130 Internet experts and Internet Society stakeholders, more than 10 roundtables and three global and two regional surveys that generated more than 3,000 responses from 160 countries.

This research resulted in the identification of six key forces that would have a profound impact on the shape of the Internet in the years to come. These include: IOT and the continued intersection between the internet and the physical world; artificial intelligence; cyber threats; the internet economy; networks, standards and interoperability; and reshaping the role of government. The research also found that Internet Society stakeholders tended to view the six drivers of change through three lenses/areas of impact: the digital divide (digital inclusion), personal freedoms and rights, and a shifting media ecosystem.

The report examines the forces and the interlinkages between each of these, as well as their relationship to the three areas of impact. It eschews much of the quantitative third-party usage data incorporated in previous reports and relies heavily on illustrative quotes from the Society's own consultative research program.

In relation to the digital divide, the report highlights ongoing progress, at least with regards to access. It notes that "from small community networks in some of the most isolated parts of the world to large-scale infrastructure development projects, we are making progress toward connecting the 53 per cent of the globe's citizens who are not yet online" (p.79). But the concern is that even the pace at which the access divide is being closed may not be fast enough to ensure that new divides don't open, as new technologies, such as AI and IOT, are adopted by those with more established underpinning infrastructure, skills and resources. The report emphasises that this may reduce the opportunity for some nations and people to benefit from new social and economic opportunities.

Furthermore, returning to touch on the privacy and security theme of the 2016 report, the 2017 edition suggests that the internet may pose a significant threat for some, stating "Vulnerable populations will … be at risk. Individuals and groups like the elderly or poor that are vulnerable to crime in the physical world are especially vulnerable to cybercrime. They may lack the skills to protect themselves and are more likely to be targets of fraud, scams and theft" (p.81). The four Global Internet Reports published to date provide an excellent introduction to the digital inclusion challenge at a global level. Together they neatly map this challenge onto the history and potential futures of the Internet. I keenly await the 2019 edition, which will take a closer look at how trends of consolidation in the Internet Economy will not only shape the ways in which the Internet is used by people around the world, but its future technical evolution.

The APO Digital Inclusion Collection features reports, commentary and other grey literature related to digital inclusion in Australia and internationally. The collection is supported by the Centre for Social Impact at Swinburne University.

Dr Chris K Wilson is curator of the APO Digital Inclusion Collection. Chris is a Research Fellow with the Centre for Social Impact at Swinburne University of Technology and principal analyst for the Australian Digital Inclusion Index (ADII) project.

2019 Global Internet Report on the Future of the Internet https://www.internetsociety.org/globalinternetreport/2018/concept-note/