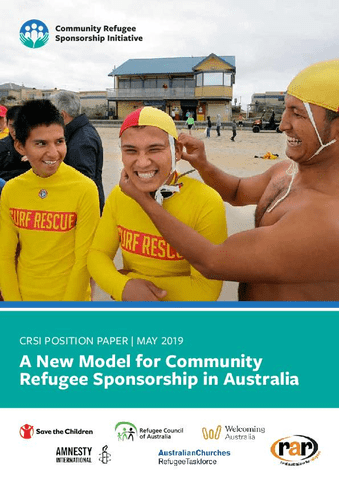 A new model for community refugee sponsorship in Australia

Members of the Australian community have repeatedly called for the oppor tunity to help resettle more refugees in Australia in order to do their bit in responding to the global refugee crisis. Australians from different backgrounds – ranging from rural communities to inner-city groups – are eager to raise funds, open their homes, offer jobs and volunteer their time to help those fleeing persecution to build a new life in Australia. A new community sponsorship model would harness the goodwill and compassion of Australians to increase the number of resettlement places offered by Australia and contribute to the successful settlement of refugees in active and cohesive Australian communities.

Australia has a long tradition and credible record of enabling communities to sponsor and help resettle refugees. Previous refugee sponsorship models, such as the Community Refugee Settlement Scheme started in 1979, have used a combination of government and private funding and involved community groups (including faith communities) volunteering their time and resources to help new refugees settle. Other community sponsorship responses, including our response to the Balkans refugee crisis in the 1990s, have demonstrated the Australian community ’s willingness to welcome refugees and to provide material and psychosocial support in the early settlement phase.

In early 2018, a number of concerned organisations joined together to form the Community Refugee Sponsorship Initiative (CRSI) – the Refugee Council of Australia, Save the Children Australia, Amnesty International Australia, the Welcome to Australia initiative, Rural Australians for Refugees and the Australian Churches Refugee Taskforce.

We believe there is potential to build on Australia’s proud histor y of community sponsorship to scale up our nation’s response to the current global refugee crisis. We are calling on the Australian Government to adopt an inclusive, well designed and community-led refugee sponsorship program that draws on the most successful aspects of the Canadian private sponsorship experience. Not only would this enable Australians to play a greater part in helping those fleeing conflict and persecution, it would also positively enhance Australia’s international reputation on responding to forced migration. Community sponsorship can be the catalyst to enrich civic life in the communities in which it takes place and also foster social cohesion and the participation of humanitarian migrants in those communities.

Services for migrants and refugees