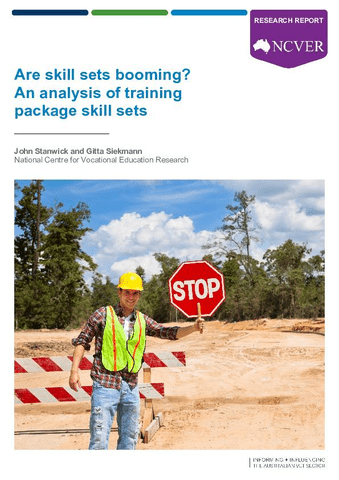 Skill sets have become recognised as an important short form of training for the modern world of work. They are seen to have a variety of purposes, including upskilling, compliance and licensing, meeting a defined industry need and as an entry pathway to further training. An analysis of nationally recognised or training package skill sets forms the specific focus of this report. The investigation uses data from the National Register of VET and the National Provider Collection — Total VET Activity.

Unaccredited training: why employers use it and does it meet their needs?

Uptake and utility of VET qualifications

Investing in vocational education and training

Vocational education policy is failing, and it's not hard to see why

Completion rates for group training organisations and direct employers: how do they compare?

Private training providers in Australia: their characteristics and training activities