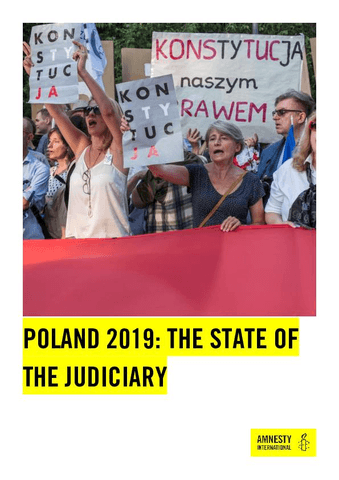 Poland 2019: the state of the judiciary

This briefing provides an update on the state of the independence of the judiciary in Poland after implementation of the 'reforms' starting in 2016. The current situation is characterized by the ongoing harassment of judges who stand in defence of human rights and judicial independence. Such harassment is occurring in the context of a concerted media smear campaign – with alleged links to the Ministry of Justice – against certain judges. The government’s attempts to “reform” the judiciary have resulted in three separate infringement proceedings against Poland at the Court of Justice of the European Union (CJEU). Some judges in Poland have responded to reforms that undermine the independence of the judiciary by submitting over a dozen preliminary questions related to the reforms’ compliance with EU law to the CJEU.

Ongoing concerns over the independence of the judiciary in Poland are reflected in the increasing difficulties judges and prosecutors face in attempting to carry out their work without political pressure.

Amnesty International continues to call on the government of Poland to:

The constitutional duty to give reasons for judicial decisions

In defence of judicial holidays

Judicial humour in the Australian courtroom

Democracy and the High Court

Judicial globalisation in the Philippines