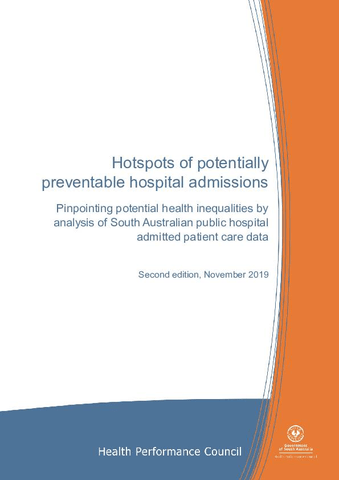 People are often admitted to hospital for reasons that could have been attended to with effective, timely preventative care in primary healthcare and other community health settings. The performance indicator set under Australia’s National Healthcare Agreement defines 22 categories of health conditions for which hospitalisation is potentially preventable, a range of acute, chronic and vaccinepreventable conditions.

In December 2017, the Health Performance Council published a bitesize teaser report of some high level analysis of South Australian public hospital admissions data to reveal some areas of the state, mainly in regional and remote country areas, which had particularly and persistently high levels of these potentially preventable hospital admissions. As we reported at the time, SA Health had been leading a collaborative effort to produce a more detailed and robust study on the topic. Two years on, as we continue to await that detailed SA Health report, we have produced this second edition of our bitesize high level analysis with more recent data and improved analytical methods.

There were 36,500 inpatient admissions for potentially preventable hospitalisations recorded in South Australia’s public hospitals in the 2018–19 financial year, some one in every 11 of all inpatient admissions. Effective, timely interventions in primary care settings or through public health interventions may have prevented many of these hospital admissions from having been necessary or reduced their incidence. Early interventions that could have removed the need for some of these admissions include take-up of vaccinations, early treatment of infections with GP-prescribed medications, and GP-led long-term management plans for chronic diseases.