This report looks at the global demand for energy, its growth and the potential effects this has on Australia’s security. The report examines Australia’s need to factor energy security into its foreign and defence policies, and develop a greater awareness of its dependence on fossil fuels.

The world is entering an era of steadily tightening energy markets. The growth in demand of the United States, China and India for imported oil and gas, and the increasing dependence of the world on supplies from unstable regions means that the adequate supply of affordable energy will become increasingly a part of most states’ security calculations in the coming decades.

Access to abundant, cheap energy has become increasingly essential to the functioning of modern economies and societies and to the processes of globalisation that have driven half a century’s economic growth around the world. Yet the uneven distribution of energy resources among states, and the critical need to access those supplies by all states, leads to significant vulnerabilities. The coercive manipulation of energy supplies, competition over energy sources, the proneness of energy producing countries to political instability, attacks on supply infrastructure, competition for market dominance, and accidents and natural disasters are all significant risks to global energy security. Although any one risk on its own may not cause much disruption, the coincidence of several may create serious problems. Australia is no less dependent on a small range of fossil fuels than most other developed countries. It is in the enviable position of being dependent on imports for less than a quarter of the energy it consumes. This has led to an understandable tendency for Australian governments and society to be more sanguine about energy security than many of the other countries of the Asia Pacific.

Australia is party to a range of energy security measures coordinated through the International Energy Agency (IEA) and the Council of Australian Governments. Recent energy security measures also include the setting up of the Border Protection Command to coordinate patrols of Australia’s offshore oil and gas fields to strengthen their security against terrorist attack. Australia is also committed to diversifying its energy types and sources and increasing the interconnection of energy systems, broadly in line with suggested practice within the IEA and APEC.

Australian society is highly dependent on road transport, which in turn is almost completely reliant on oil and gas, with little prospect of short-term substitutes. Australia’s self-sufficiency in oil products is declining markedly, and like most other Asia–Pacific states, Australia will become increasingly dependent on imports from the Middle East in the next decades.

Furthermore, energy security issues are likely to substantially reshape the great power relationships in the Asia Pacific. Although energy competition among the major powers is unlikely to trigger major conflict, it may be a contributing cause to tensions and competition, particularly in the Middle East and Central Asia. Most of the fragile states in the Asia Pacific are completely dependant on energy imports, and would have little economic resilience in the face of such a major shock. The prospect of several of these states moving towards collapse at the same time would constitute a serious challenge to Australia’s security policy.

And a general energy crisis, even if it didn’t have a profound effect on Australia directly, could do major damage to the Australian economy by virtue of its effects on other economies more dependent on energy imports.

Australia needs to factor these broader aspects of energy security into its foreign and defence policies. The Australian Government believes that a freely operating global energy market is the best guarantor of global energy security. The market diversifies risk, by making disruptions to supply anywhere in the system able to be absorbed by a general rise in price. And it matches up exporters’ interests in continued demand for their energy with importers’ interests in steady, affordable supplies of energy. But history shows that global energy markets can be distorted by distrust, rivalry and power manoeuvring. A comprehensive international energy security policy requires strategies to ensure that such considerations do not imperil the operation of the energy market.

As a major energy exporter, Australia has the diplomatic weight to advance a multilateral mechanism that brings together the world’s major energy producers and consumers to promote cooperative approaches to managing supply problems; a reliance on the free operation of a transparent global energy market; and the development of a greater diversity of fuel types and sources. Australia’s status as a maritime power also allows it to play a more vigorous role in promoting cooperative regional frameworks for the secure transit of energy supplies.

One biosecurity: a working partnership

The devil in the detail: Australia's first national security statement

Securing the Australian city: What is the national adaptation role in climate-constrained future?

Foucault and everyday security: lessons from the panopticon 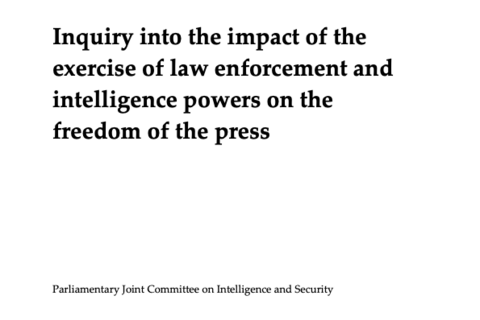