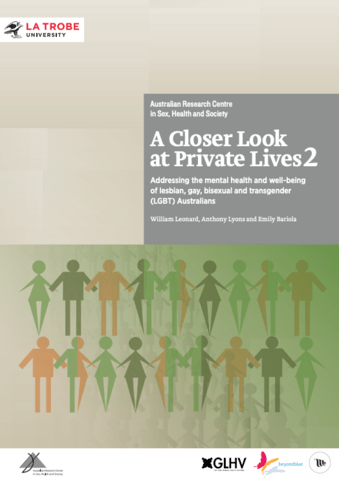 A closer look at private lives 2

A Closer Look at Private Lives 2 is a companion to the second Private Lives report released in 2012. The research and writing of both reports were funded by beyondblue and the Movember Foundation. The project was jointly managed by GLHV and ARCSHS, La Trobe University.

The first Private Lives was released in 2006 and at the time was one of the largest reports on LGBT health and wellbeing anywhere in the world. Both the first and second reports provided a snapshot of LGBT Australian’s everyday lives. They included demographic data on diversity within LGBT communities and data on LGBT Australian’s physical and mental health, health service use, relationships, experiences of discrimination and community connections.

This companion report, in contrast, focuses on the mental health and wellbeing of LGBT Australians. It relies on the mental health data from Private Lives 2 and looks, in detail, at variations in psychological distress and resilience between LGBT and mainstream communities and variations within LGBT communities according to gender identity, sexual identity, age and socio-economic status. It also looks at the relationships between LGBT Australians mental wellbeing and their experiences of heterosexist discrimination, drug use, LGBT and mainstream community engagement, and health service use.

The report concludes with an evidence-based LGBT mental health policy and program framework to guide the development of policies, programs and services aimed at promoting LGBT Australians’ positive mental health and their access to quality care.

Private Lives 2 reported on the findings of a national, online survey of the lives of 3,835 LGBT Australians. Respondents came from all states and territories and from rural, regional and remote areas.

The companion report used two of the validated scales from Private Lives 2 as measures of mental health outcomes: the K10 Psychological Distress Scale; and the Brief Resilience Scale.

The development of the LGBT mental health policy and program framework involved a review of recent Australian population and health promotion strategies and a separate review of the research and grey literature on LGBT-inclusive service provision in Australia and overseas.