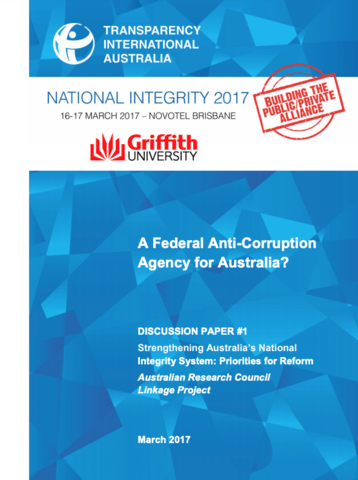 A federal anti-corruption agency for Australia?

This major paper, canvassing key issues for the design of a federal anti-corruption commission, has been released at National Integrity 2017, as part of a new assessment of Australia’s systems of integrity, accountability and anti-corruption.

Professor A J Brown, leader of the Australian Research Council Linkage Project ‘Strengthening Australia’s National Integrity System: Priorities for Reform’, said the paper will stimulate debate on some of the big questions about the purpose, role and powers of any new agency.

The paper includes perspectives from Transparency International Chairman, Anthony Whealy QC, Flinders University professor, Adam Graycar, and Professor Brown on the gaps and concerns in Australia’s institutions which are leading to calls for a new federal anti-corruption body.

The body of the paper, ‘Integrity of Purpose: Designing a Federal Anti-Corruption Commission,’ by Dr Grant Hoole and Associate Professor Gabrielle Appleby, of the University of New South Wales, spells out some of the deep questions that need to be answered about such an agency.

Questions posed by the paper include: