This has been a major project of the AIBS Board over the past five months and represents a significant achievement in enabling AIBS to lead and influence public debate around building regulatory reform throughout Australia.

While the assumption might be that this policy is in response to the disastrous outcomes and subsequent public scrutiny of the building regulatory system following the Grenfell Towers fire in London, this project commenced in early May this year, prior to the fire in London. In fact, the intended release of the policy has been delayed due to the work required to prepare our submission when AIBS was invited to appear before the Senate Inquiry into NCBP and external cladding in July.

This initial release of the policy is with the intent that the policy is a ‘living document’ and will be reviewed and updated on a regular basis to ensure that AIBS continues to represent the overall view of members and the profession in this key area of building regulatory reform.

AIBS believe there needs to be a system of regulations that is more transparent and easily understood by professionals working in the industry, and by the general public, along with a modern, nationally consistent legislative framework if we are going to prevent disastrous building failures in Australia.

Since problems with non-conforming products emerged, we have seen plenty of people criticise the regulations and other professionals working in it, and while some have put forward suggestions for fixing part of the system, we haven’t seen anyone come up with a practical solution for the whole building regulatory system that is consistent nationally.  Further to this, AIBS continue to be the lone voice representing building surveyors in the face of recent public criticism of the profession and through this policy, we look forward to further educating the public on the critical role that our profession plays.

AIBS present this policy as a guide to what we see as the way forward, and a blueprint for our future building industry.

The policy is ambitious and achieving all of the objectives in it will be challenging, but if we do not aspire to the highest standards, we will never achieve best practice in our building industry in Australia.

The Board, supported by our Chapter Committees and senior staff, will now be advocating this policy to all levels of government, key stakeholders, industry and the wider public so as to actively play a greater role in building regulatory reform.

This AIBS Policy on Building Regulatory Reform in Australia seeks to identify and define the key components of an effective building regulatory system and to demonstrate that within such a system many aspects are interconnected and support each other. AIBS believes that this policy represents best practice in a building regulatory system. However, AIBS also recognises that there may be practical limitations to its implementation. Examples of these limitations include barriers within the Australian constitution and the current complex regulatory environment. This policy recognises that there have been significant advances in the building and construction industry over the past 30 years that have not been matched by significant advances in the regulatory framework and approach. This policy seeks to provide a guide to a more contemporary framework and approach to the building regulatory environment in Australia.

Building products of the future 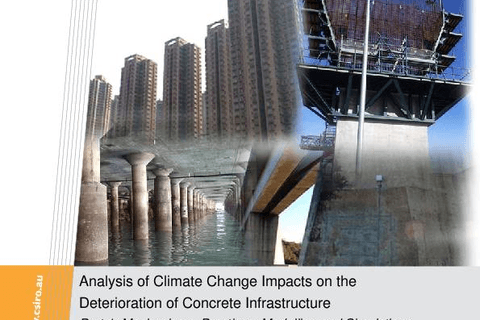 Analysis of climate change impacts on the deterioration of concrete infrastructure