Oversight of intelligence agencies: a comparison of the 'Five Eyes' nations

Australia, Canada, New Zealand, the United Kingdom and the United States each have some combination of parliamentary/congressional, independent and judicial oversight of their intelligence agencies, in addition to accountability through the executive branch. However, there are differences in the nature and scope of each of those components.

The six agencies comprising the Australian intelligence community are overseen by a parliamentary committee that examines their administration and expenditure and an independent Inspector-General of Intelligence and Security, who examines the legality and propriety of their activities. Most of the agencies’ activities and powers are authorised by the responsible ministers. A review completed in June 2017 recommended that the remits of the committee and the Inspector-General be expanded to include four additional agencies, and that the Inspector-General’s resources be significantly increased.

Canada has passed legislation creating a committee of parliamentarians to review the policy, administration, finance and operations of Canada’s national security and intelligence community. At present, only two agencies are subject to dedicated independent expert review for lawfulness. Canada’s national police force, which has responsibility for investigating security offences, is subject to independent expert review. However, this review is limited to handling public complaints about police officer conduct and, with the consent of the Public Safety Minister, undertaking public interest studies of specified activities. A Bill has been introduced that would create a single expert review body mandated to investigate complaints made in relation to the activities of three agencies and to examine the lawfulness, reasonableness and necessity of all national security and intelligence activities undertaken in the federal government. The Bill also proposes the creation of an Intelligence Commissioner to give final approval to certain activities undertaken by Canada’s signals intelligence and security intelligence agencies.

In the United Kingdom, the main focus of the Intelligence and Security Committee is to oversee the expenditure, administration, policies and (with some limitations) operations of the three key intelligence agencies, though it has scope to examine the work of other intelligence, security and law enforcement agencies too. The Investigatory Powers Commissioner provides independent oversight of the use of intrusive powers by the three key intelligence agencies. The Commissioner, along with several judicial commissioners, is required to keep under review the exercise by public bodies of various statutory functions, and may be directed by the Prime Minister to review any other functions of the three key intelligence agencies. Legislation has been passed under which warrants, currently issued by ministers, will only come into force after being reviewed by a judicial commissioner. The Investigatory Powers Tribunal investigates complaints about public bodies’ use of investigatory powers.

The United States intelligence community comprises 17 executive branch entities. Congressional oversight of the intelligence community is spread across several committees, including specialised committees on intelligence in the House and the Senate. While each has some limits on what it may examine, taken collectively the committees have the ability to inquire into all of the intelligence-related activities of the US Government. The Executive Office of the President houses several key mechanisms for overseeing the intelligence community, including the President’s Intelligence Advisory Board and the Privacy and Civil Liberties Oversight Board. These are augmented by a network of Inspectors General and legal counsels. In addition to Inspectors General attached to specific agencies and departments, the Inspector General of the Intelligence Community conducts audits, inspections and investigations of cross-cutting programs and activities. The federal judiciary examines a wide range of intelligence activities under a number of laws, including the Constitution. Most notably, the Foreign Intelligence Surveillance Court reviews applications for warrants related to the collection of foreign intelligence by the US Government.

Despite differences in the approach taken, each of the five countries has developed a framework that includes a system of checks and balances that spans the various branches of government, and which aims to ensure that agencies are accountable for both their administration and expenditure and the legality and propriety of their activities.

The intelligence communities have evolved to meet new challenges as they arise, and will continue to do so. It will be important for the oversight arrangements to keep pace with such changes.

Report of the inquiry into Australian intelligence agencies (Flood Report)

The 2017 independent review of intelligence: views from The Strategist 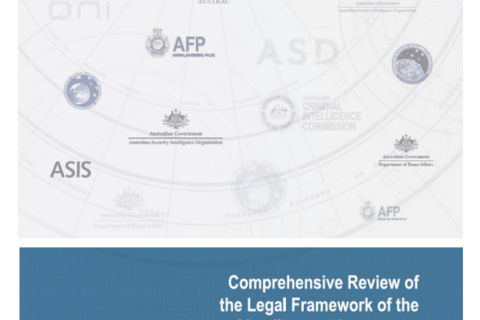 Getting it right: integrating the intelligence, surveillance and reconnaissance enterprise