The Bureau monitors trends in the percentage of rejected incidents to see whether they could be affecting the trend in recorded crime. Where a significant upward trend in the number of rejected crime reports is detected, steps are taken to determine whether the police are complying with the NSW Police Crime Recording Standard (see below).

It bears emphasis that criminal incidents may validly be rejected, and hence not counted as crimes, when it can be proven that the alleged incident did not occur. Certain offence types may validly have relatively high levels of rejected incidents. For example, abduction and kidnapping, sexual assault and breach Apprehended Violence Order may involve false reports that can be disproved on further investigation. Stock theft may be reported when stock have wandered off rather than being stolen. A motor vehicle may be reported as stolen but then later the owner may advise that they had simply forgotten where they had left the vehicle. Vehicles are also sometimes reported stolen by their owners in a bid to defraud insurance companies.

Drivers may forget to pay for petrol before driving off from a service station, but then later realise and return to pay. Following a change to Police procedure from September 2013, whereby service stations are required to fax a form to report petrol theft, fewer of these incidents have been reported.

A significant increase in the percentage of crimes rejected does not in and of itself indicate that police are trying to manipulate crime figures to create the appearance of a decrease in crime. It is important to examine the scale of the increase in rejected incidents (is it large enough to have affected trends in recorded crime?), whether the level of rejection lies within acceptable bounds (does it exceed five per cent?) and whether the police can give a satisfactory explanation for the rise in rejected incidents.

Immigration and crime: what does the research say?

Swedish immigration is not out of control- it's actually getting more restrictive. 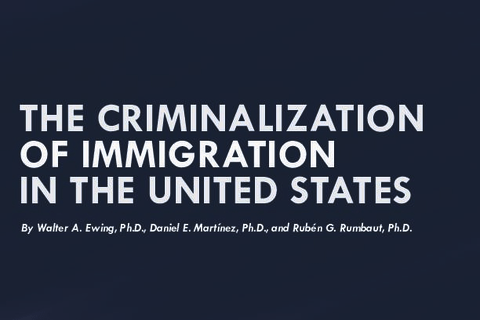 The criminalisation of immigration in the United States

Urban crime rates and the changing face of immigration: evidence across four decades