This report identifies concerning trends for the safety and wellbeing of children living in areas impacted by conflict, through analysis of the United Nations Annual Reports of the Secretary General on Children and Armed Conflict (CAAC) and new research by the Peace Research Institute Oslo (PRIO). The research utilizes figures that are published, independently verified and credible, but one of the key findings of the data mapping process is that there is a significant and worrying gap in child-specific data in conflicts.

Although all warring parties are obliged to protect children, in conflicts around the world heinous attacks are committed against children on a daily basis, for which the perpetrators are not being held to account. What is more, many of these violations are increasing, driven by brutal conflicts like the war in Syria. There is an urgent need for action to end what is too often a war on children.

The key findings of the report are:

-        The number of children living in a conflict zone has increased by more than 75 percent from the early 1990s when it was around 200 million, to more than 357 million children in 2016 – around 1 in 6 of the world’s children. 165 million of these children are affected by high intensity conflicts. Children living in such conflict-impacted areas often lack access to school and health facilities, and are more exposed to violence.

-       While the majority of the world’s conflict-affected children live in Asia, the Middle East is where children are most likely to live in a conflict zone. In 2016, about 2 in 5 children in this region were living within 50km of a conflict event in their country, and children in Syria, Iraq, Yemen and other warzones in the region are at high risk of all six grave violations. Africa is second, with 1 in 5 children affected by conflict.

-       Syria, Afghanistan and Somalia are at the top of our ranking of the 10 most dangerous conflict-affected countries to be a child in 2016, the latest year for which comprehensive data is available. This is assessed based on factors including rates of the six grave violations and share of children living in conflict in that country.

-       By many metrics, children are more at risk in conflict now than at any time in the last 20 years. There are significant limitations and variations in data collection across conflict contexts, but some of the trends are clear: for example, there has been an escalation in the number of UN-verified cases of killing and maiming of children, with an increase of nearly 300 percent since 2010. The number of incidents of denial of humanitarian access has also risen 15-fold in the same period, and there has been a growing trend of abductions.

Prevention of child abuse and neglect

Progress for children: a report card on child protection 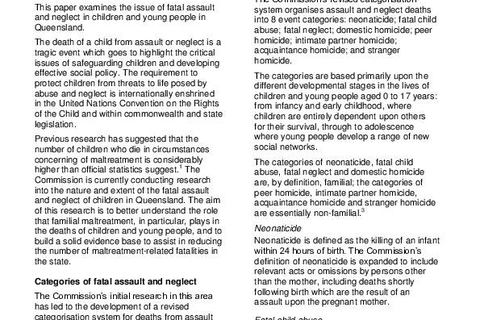