In this report, we argue that today’s digital advertising infrastructure creates disturbing new opportunities for political manipulation and other forms of antidemocratic strategic communication. Ad platforms, web publishers, and other intermediaries have developed an infrastructure of data collection and targeting capacities that we call the Digital Influence Machine. The DIM incorporates a set of overlapping technologies for surveillance, targeting, testing, and automated decision making designed to make advertising – from the commercial to the political – more powerful and efficient.

We argue that the use of the DIM to identify and target weak points where groups and individuals are most vulnerable to strategic influence is a form of weaponization. Unlike campaigns of even a decade ago, data-driven advertising allows political actors to zero in on those believed to be the most receptive and pivotal audiences for very specific messages while also helping to minimize the risk of political blowback by limiting their visibility to those who might react negatively. The various technologies and entities of the DIM cohere around three interlocking communication capacities:

The social influence of the DIM, like all technological systems, is also largely a product of the political, economic, and social context in which it developed. We analyze three key shifts in the US media and political landscape that contextualize the use of the DIM to manipulate political activity:

We document three distinct strategies that political actors currently use to weaponize the DIM:

Despite this range of techniques, weaponized political ad targeting will rarely, if ever, be effective in changing individuals’ deeply-held beliefs. Instead, the goals of weaponized DIM campaigns will be to amplify existing resentments and anxieties, raise the emotional stakes of particular issues or foreground some concerns at the expense of others, stir distrust among potential coalition partners, and subtly influence decisions about political behaviors (like whether to go vote or attend a rally). In close elections, if these tactics offer even marginal advantages, groups willing to engage in ethically dubious machinations may reap significant benefits.

Our research suggests that key points of intervention for mitigating harms are the technical structures, institutional policies, and legal regulations of the DIM. One significant further step companies could take would be to categorically refuse to work with dark money groups. Platforms could also limit weaponization by requiring explicit, non-coercive user consent for viewing any political ads that are part of a split-testing experiment. Future ethical guidelines for political advertising could be developed in collaboration with independent committees representing diverse communities and stakeholders. All of these possible steps have benefits, risks, and costs, and should be thoroughly and seriously considered by corporations, regulators, and civil society.

Whatever the future of online ad regulation, the consideration of political ads will only be one component in a larger effort to combat disinformation and manipulation. Without values like fairness, justice, and human dignity guiding the development of the DIM and a commitment to transparency and accountability underlying its deployment, such systems are antithetical to the principles of democracy 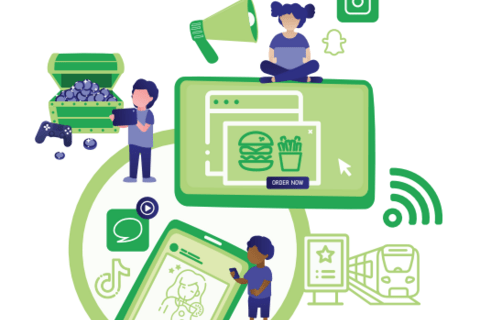 Under the radar: harmful industries' digital marketing to Australian children

Shoshana Zuboff on the undetectable, indecipherable world of surveillance capitalism