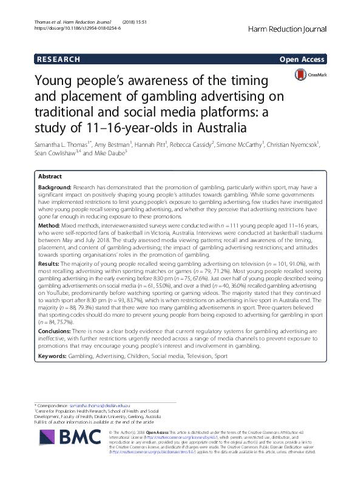 Young people’s awareness of the timing and placement of gambling advertising on traditional and social media platforms: a study of 11–16-year-olds in Australia

Mixed methods, interviewer-assisted surveys were conducted with n = 111 young people aged 11–16 years, who were self-reported fans of basketball in Victoria, Australia. Interviews were conducted at basketball stadiums between May and July 2018. The study assessed media viewing patterns; recall and awareness of the timing, placement, and content of gambling advertising; the impact of gambling advertising restrictions; and attitudes towards sporting organisations’ roles in the promotion of gambling.

There is now a clear body evidence that current regulatory systems for gambling advertising are ineffective, with further restrictions urgently needed across a range of media channels to prevent exposure to promotions that may encourage young people’s interest and involvement in gambling.