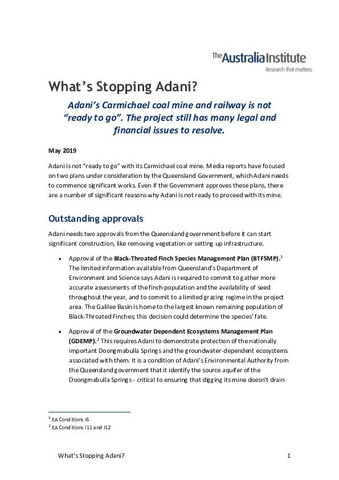 Adani is not “ready to go” with its Carmichael coal mine. Media reports have focused on two plans under consideration by the Queensland government, which Adani needs to commence significant works. Even if the government approves these plans, there are a number of significant reasons why Adani is not ready to proceed with its mine.

Adani needs two approvals from the Queensland government before it can start significant construction, like removing vegetation or setting up infrastructure.

Approval of the Black-Throated Finch Species Management Plan (BTFSMP). The limited information available from Queensland’s Department of Environment and Science says Adani is required to commit to gather more accurate assessments of the finch population and the availability of seed throughout the year, and to commit to a limited grazing regime in the project area. The Galilee Basin is home to the largest known remaining population of Black-Throated Finches; this decision could determine the species’ fate.

Approval of the Groundwater Dependent Ecosystems Management Plan (GDEMP). This requires Adani to demonstrate protection of the nationally important Doongmabulla Springs and the groundwater-dependent ecosystems associated with them. It is a condition of Adani’s Environmental Authority from the Queensland government that it identify the source aquifer of the Doongmabulla Springs - critical to ensuring that digging its mine doesn’t drain the springs. CSIRO and Geoscience Australia raised concerns about the plans. FOI documents show CSIRO, on whose advice the federal Minister relied, was given mere hours to consider the plans and still held reservations, “the devil is in the detail that we do not have”.

Killing Country - The Adani Carmichael coal mine: introduction to a special five-part series

Explaining Adani: why would a billionaire persist with a mine that will probably lose money?

Back 100% renewables and moratorium on new coal mines: voters in key Coalition seats