Explaining Adani: why would a billionaire persist with a mine that will probably lose money?

John Quiggin
The Conversation
Coal Foreign investment Conservation Queensland
Resources
Explaining Adani: why would a billionaire persist with a mine that will probably lose money?
Description

By mid-June, if everything goes as expected, Adani Australia will receive the final environmental approvals for its proposed Carmichael coal mine and rail line development.

Newspaper reports based on briefings from Adani suggest that, once the approvals are in place, the company could begin digging “within days”.

On Friday the Queensland government approved Adani’s plan to protect a rare bird, apparently leaving it with just final regulatory hurdle: approval for its plan to manage groundwater.

Its billboards in Brisbane read: “We can start tomorrow if we get the nod today”.

But several big obstacles remain. Even after governments are out of the way, it will have to deal with markets and companies that aren’t keen on the project.

Killing Country - The Adani Carmichael coal mine: introduction to a special five-part series 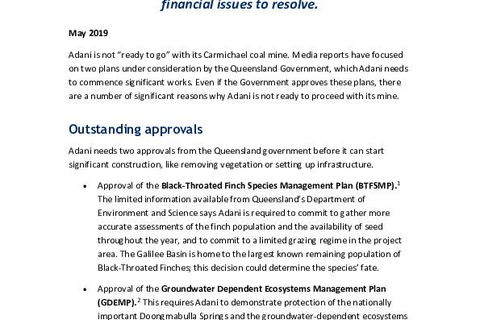 Back 100% renewables and moratorium on new coal mines: voters in key Coalition seats