New Zealand scientists have suggested that multiple pastoral farming practices could reduce onfarm biological greenhouse gas (GHG) emissions while maintaining (and in some circumstances even increasing) farm profits (e.g. de Klein and Dynes, 2017). However, these win–win practices (which we define as “no-cost” mitigation practices) are reported to be under-adopted in New Zealand (Reisinger et al. 2018). The focus of this paper is to identify barriers affecting the adoption or expansion of no-cost mitigation practices by farmers in New Zealand. We define and categorize barriers to adoption using a typology of barriers developed by Jaffe (2017). This typology provides a comprehensive list and precise/accurate description of multiple barriers that might be present in farming contexts. First, we confront the typology with empirical evidence in the literature studying the barriers to the adoptions of technologies and practices in the context of pastoral farming. Although the evidence on perceptions and adoption of GHG emissions mitigation options in New Zealand is very limited, several of the barriers in Jaffe’s typology have been evidenced by researchers as affecting the decisions to adopt different innovative technologies and practices on farms.

To complement the literature review and, more importantly, focus on no-cost GHG mitigation practices, we conducted interviews with 14 farmers in different regions of the country. In these conversations we discussed different managerial and practical implications of five different no-cost farming practices, with the aim of identifying barriers that affect their adoption or expansion. We describe in the paper more than 40 quotes obtained from farmers, from which we identified the occurrence of 16 different barriers. Among these, the “Unsureness about practicality”, “risk and uncertainty” and “complex interactions” barriers showed as the most frequent barriers identified as causing under-adoption of the evaluated practices. In addition, different types of perceived costs (financial barriers), such as “modelling mismatch” and “learning and adjustment”, have been pointed out as a limitation for adoption (which are captured by barriers category “arguably efficient” in Jaffe’s typology). We also found that in some cases non-financial barriers seem to be interconnected – in especial the case when the interactions’ complexity increases the riskiness of the outcome (the “risk and uncertainty” barrier) and makes it difficult to see whether the mitigation option is practical (a barrier of “unsureness about practicality”).

Farms, forests and fossil fuels: the next great landscape transformation?

Growing a clean economy: opportunities for Australian states and territories

Managing scarcity and ambition in the NZ ETS

Sustainability and the health sector: a guide to getting started 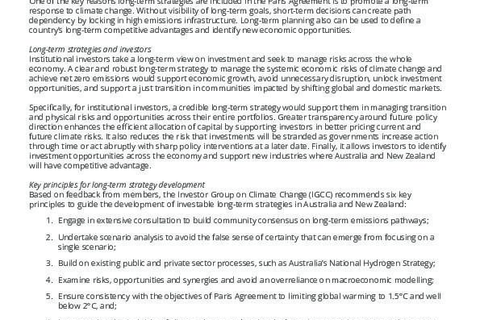