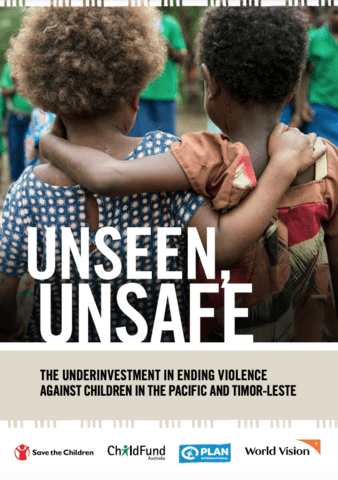 Unseen, unsafe: the underinvestment in ending violence against children in the Pacific and Timor-Leste

Violence against children is at endemic levels across Pacific island nations and Timor-Leste. Millions of children experience exceptionally high levels of physical, emotional and sexual violence, as well as neglect.

For the vast majority of children, this violence is occurring in a place where they should feel safest: their homes.

Through five country-level case studies, this report reveals the stark reality of the magnitude of this violence.

In Papua New Guinea alone, an estimated 2.8 million children – equivalent to over 75% of the child population – experience violent discipline in the home. In two provinces surveyed by Save the Children, 70% of children aged 6 to 8 years reported feeling ‘scared and in pain’ in their community. Sexual violence is also exceptionally high, with Médecins Sans Frontières (MSF) reporting that children were the victims in over 50% of the sexual violence cases referred to their clinics.

These statistics starkly demonstrate the extent of the problem across the region. This ongoing violence robs children of their sense of self-worth, hinders their development and limits their ability to prosper and reach their full potential. Many children exposed to violence live in isolation, loneliness and fear, with nowhere to feel safe and no one to turn to for help.

Despite the clear evidence of the scale and gravity of violence perpetrated against children in the region, funders and policymakers have thus far failed to enact the measures needed to end this scourge. These children remain ‘unseen and unsafe’ within a system that has failed to invest in their safety.

For the first time, this report reveals the critical lack of Overseas Development Assistance (ODA) invested by the Australian Government and other key donors in programs aimed at ending violence against children (EVAC).

Our analysis estimates that, in the Pacific and Timor-Leste, expenditure on programs specifically designed to end violence against children (EVAC specific) was only AUS$1.1 million or 0.1% of Australian ODA in 2017. Across all major ODA donors, just AUS$3.4 million was spent. Even if we take a generous view and broaden the funding lens to programs that include some activities related to ending violence against children, the proportion spent by Australia rises to a paltry AUS$55 million or 4.8% of development assistance to the region.

The key financial findings are deeply concerning. They demonstrate a lack of focus and failure to prioritise EVAC expenditure on the part of the Australian government and other donors in the region.

• The Australian government significantly increases its EVAC-specific ODA allocation to $55 million over three years in the Pacific and Timor-Leste (which is 1.5% of regional ODA).

• Other major donors commit to increasing their investment in EVAC-specific initiatives in the Pacific and Timor-Leste to 1.5% of their ODA.

• All donors establish a policy platform that puts children at the centre of development. Through the development of child-centred policies and establishing dedicated resources to oversee the mainstreaming of child protection and child rights across all thematic areas.

• All donors develop an ‘ending violence against children’ policy marker (similar to the gender equality marker) to enable the tracking and reporting of expenditure on EVAC initiatives.

• All donors strengthen the intersectionality between violence against women and children programming in the Pacific and Timor-Leste. 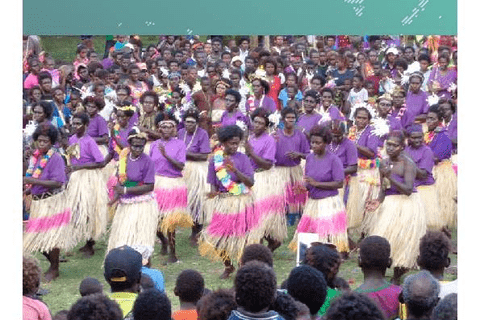 Ending violence against women and girls: evaluating a decade of Australia’s development assistance

The Dynamics of Aid and Political Rights

Developing countries in need: Which characteristics appeal most to people when donating money?

Making a living in Vanuatu: Livelihoods and development in peri-urban Port Vila

Charities and terrorism: lessons from the Syrian crisis